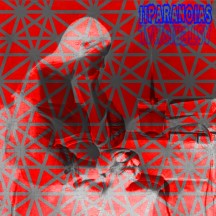 
If psychedelic music were a giant pool, would you go in feet first like a sissy, or strap on your goggles and go for the head dive?

The Englishmen in the trio known as 11Paranoias are psychonauts who prefer to plunge into that pool head first, and once they do they don't hold back. 2019's Asterismal sees the band essentially keeping their formula intact, a move that could be decried for a perceived lack of forward momentum but that's really more of a "if it ain't broke, don't fix it" type situation than anything. The sound here could best be described with buzzword favorites such as "massive" and "swallowing," as 11Paranoias once more conjure forth a riff heavy, entrancing doom metal beast that has long since replaced the blood in its body with Ayahuasca. A very cohesive and well structured effort, it is quite easy to get lost in the listen with Asterismal while its waves of fuzzy guitar, vocal chants, and trippy effects craft a tight, unbroken, ritual like atmosphere.

Songwriting wise, Asterismal has a pleasant degree of diversity as well, and despite 11Paranoias going at a common theme throughout its various tracks, they nonetheless succeed in transitioning through many different shades of psychedelic metal shenanigans as well. The bulk of the album follows in the vein of opener "Loss Portal": a repetitive, spacey, and gradually climaxing doom metal sound. But every now and then 11Paranoias shift course ever so slightly, as with the more Hawkwind-ish feel of "Bloodless Crush," the bass and drums only delivery on "Prelude," or even a more drone-like approach on the "Acoustic Mirror II" closer.

For those not too keen on psychedelic music, let alone when it's infused into metal, Aseterismal may not be an overly appealing listen, as its minimalistic, repetitive songwriting could come off as something of a bore. But for those who enjoy slowly building, well paced compositions that reward intimate, zoned out listens, it comes as highly recommended. Four albums in, with Asterismal 11Paranoias have easily established themselves as a powerful, if oft overlooked force to be reckoned with in the realm of psychedelic metal.

As some dirty hippie once said: "Turn on, tune in, drop out."

Written on 06.04.2019 by
Apothecary
Comforting the disturbed and disturbing the comfortable since 2013.
More reviews by Apothecary ››