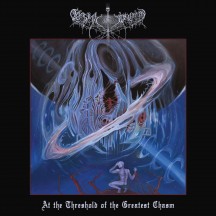 
Death metal in 2019 has, admittedly, not really held up to how massive of a phenomenon it was last year, when it seemed to get all the attention. But that doesn't mean that 2019 is really stale in terms of death metal. For example, here's Cosmic Putrefaction.

Cosmic Putrefaction is an Italian band whose sole member, Gabriele Gramaglia, also has some other one-man bands, like the progressive post-metal Summit and the progressive black metal The Clearing Path, all of which bear the I, Voidhanger mark. And despite the association with two bands whose genre tag includes "progressive", Cosmic Putrefaction is surprisingly un-progressive, instead being a good ol' death metal band releasing their debut album.

At The Threshold Of The Greatest Chasm isn't even half an hour long, so it's quite on the edge between EP and full-length, but its short run time makes it feel so much more packed and immediate. With a lot of the songs barely over two minutes in length, there isn't much place for the sections to really repeat too much, even though that means there isn't much place for them to develop, either; instead the songs are ever-changing sonic assaults, with some damn strong riffs that you'd better get on first listen, because they ain't gonna be here for long.

All of this makes At The Threshold Of The Greatest Chasm quite a strong listen, but one that doesn't leave much behind, just a sense that it was bludgeoning while I was listening to it, but with very few defining characteristics. As I mentioned, despite the ever-changing nature of the riffs, it doesn't feel technical or progressive; and it doesn't feel that cosmic either, as the band's name would have suggested. There're some atmospheric passages sprinkled in, but the bulk of this album is really heavy and really chaotic, dominated by the vocals of Brendan Sloan of Convulsing, who does most of the vocals on this album, which feel like they come just a wee bit too much in the front of the guitars. I'm not sure I really appreciate the "wall of sound" production on this thing, but it does make the album feel even more claustrophobic.

But for its short time and lack of actual catchiness, I can't deny that it's an absolute beast of an album, sitting on the fence between cavernous, blackened, and technical without overly being any of those. I would like to see this get a bit more development into a cohesive thing in the future, because for now, I'm more excited about future Summit and The Clearing Path albums. But for now, obliteration.

Written on 03.05.2019 by
RaduP
Doesn't matter that much to me if you agree with me, as long as you checked the album out.
More reviews by RaduP ››