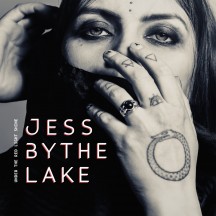 
This is the solo project of Jess from Jess And The Ancient Ones and this is not a metal record. You've been warned!

Granted Jess And The Ancient Ones were never really metal either, but at least their guitar-driven occult-themed psychedelic rock payed tribute to one of the sounds in the melting pot that eventually birthed metal back in the day, and it was clearly marketed towards people who would love metal as well. And if it wasn't obvious from having her name (or her nickname I guess) in the band's name, Jasmin Saarela's voice is a pretty important part of their music, so her coming out with a solo record wasn't that big of a surprise.

Obviously there is some scrutiny to solo records by people famous from being in a band, especially if there's a slight change of sound as well. Few people care about Anneke Van Giersbergen's solo records compared to her The Gathering stuff, or a Liv Kristine one compared to a Leaves' Eyes one. You get the point. So I can expect Under The Red Light Shine to get considerably less attention than if it were released under the Jess And The Ancient Ones name. But for the few people who would eventually check this out, they'd be greeted by a very powerful vocal soul album with plenty of 60s psychedelia tones.

The psychedelic tendencies of the music are certain traces of Jasmin's main band, but here they feel less occult, but more akin to 60s soul than actual psychedelic rock, in a way that ought to remind people that 60s music had a larger sound palette than folks remember. And with those 60s tones and the soulful vocals, the rest of the music made me feel like it was a Florence + The Machines album that was somehow recorded in the 60s. And with it being a solo record by a singer, it was obvious that the vocals would indeed take center stage and prove Jasmin's amazing capabilities as a singer, with plenty of emotion and loads of confidence.

That isn't to say that just because the vocals get most of the attention that the instrumental side of the album is to be neglected. "Legacy Crown" is the best example I can give of a song where it clearly feels like a band effort rather than a hired band backing a singer. The latter rarely feels the case anyway, as the musicians Jasmin got for this album have managed to create some great soundscapes that don't fall beneath the weight of the vocals, which, being so soulful and powerful, would be easy to get lost behind as mere background music. The music is less guitar-driven as the usual psychedelic rock we are used to hearing from Jess, but it isn't to say that there isn't any rock influence between the soulful and folkier takes that spread throughout the album.

Under The Red Light Shine manages to prove its worth as more than some forgotten half-assed solo record, as well as once again proving Jasmin to be an amazingly soulful singer. And perhaps we needed a bit more of a bridge between these two genres, metal and soul, which have pretty much been quite insularly separated, other than that time Charles Bradley covered a Black Sabbath song.

Also the last track, seemingly inspired by the Christopher Nolan film of the same name, reminded me that I need to rewatch this scene for the hundredth time.

Written on 20.06.2019 by
RaduP
Doesn't matter that much to me if you agree with me, as long as you checked the album out.
More reviews by RaduP ››