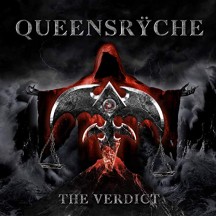 
To bounce back after so many releases that ranged from uninspired to terrible is not an easy feat. Queensrÿche came back to life -when even their most fanatic followers had completely given up on them- with their self-titled album six years ago, then continued to earn back much of their lost renown with Condition Hüman that followed, and they now solidify the return to the metal world's list of bands that deserve our respect with The Verdict.

A big part of this totally unexpected comeback must be credited to Todd La Torre, who has replaced Geoff Tate by sounding very much like... a young Geoff Tate. Despite the fact that Tate is one of the greatest vocalists in the history of heavy metal, the split with Queensrÿche and the choice of La Torre as his replacement was the best thing that could happen to the band. There is no need for comparisons though; Todd is a very talented singer and has also taken over drum duties in Queensrÿche's latest release (Scott Rockenfield has been on a break from the band for the last couple of years), which only proves that his current influence on the group is stronger than ever. And even though his drumming does not do much more than follow Rockenfield's path, his impressive vocal range and performance would give young Tate a run for his money (damn, didn't I just say that there is no need for comparisons?).

But how does the album sound?

While Queensrÿche and Condition Hüman were both leaning toward the sound of the classics Operation: Mindcrime and Empire, The Verdict feels like it should have come after Promised Land. Compared to its two predecessors, The Verdict is a more introspective affair, which successfully blends heavy metal, prog and even grunge and alternative, yet it is still unmistakeably Queensrÿche. Longtime fans will be pleased to listen to trademark energetic cuts like "Blood Of The Levant" and "Man The Machine" or to Eddie Jackson's domineering bass driving the magnificent "Light-years". I am also pretty sure that "Portrait" will flood you with memories of the old magic. But this album is not just another day at the office.

It is a welcome surprise to find out that The Verdict is not all-typical Queensrÿche of yore; "Inside Out" boasts some Eastern vibes and "Propaganda Fashion" hints at the early Warrior Soul years with a grunge undertone, while "Dark Reverie" has an alternative-sounding chorus that violently breaks the song's dark and dramatic flow. This expansion of sound paired with the inclusion of elements off the band's late '90s to late '00s efforts -sans the lack of creativity and inspiration of those releases- gives the album extra pull. The songwriting in general is more adventurous and multifaceted, and the numerous shifts of "Bent" or "Launder The Conscience" are good examples to give you an idea of what I mean.

As a result, The Verdict is more daring than Queensrÿche and Condition Hüman, and takes the band forward to a new era with plenty of confidence, while not straying too far away from the re-established winning formula. Drawing nearer to their 40-year anniversary, Queensrÿche seem to have healed their wounds for good and are relevant again.

"There are many truths behind these eyes that you see
On one side love and laughter, the other darkened disbelief"