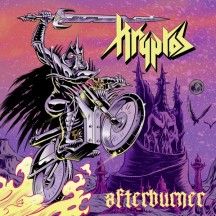 
I have to admit that my knowledge of Indian metal is extremely limited. Kryptos is one of the very few bands I have heard of from that part of the world and their latest release, Afterburner, should get them a more visible spot on the metal map.

The cover art reminds of Painkiller a lot, which makes absolute sense since Kryptos are excessively influenced by Judas Priest, as well as Iron Maiden. Afterburner continues the shift in the band's musical approach, which started with Burn Up The Night, in the sense that it is simpler, more catchy and more fun to listen to than their first releases. The main thing that still connects Kryptos with thrash today are the vocals that sound like a softer version of Kreator's Mille Petrozza, something that doesn't bother me personally at all.

The strongest point of Afterburner is the guitar, as it has always been the case with this band, and it is virtually impossible not to get severely nostalgic with its sound. Every main or opening riff of every song gets you hooked and makes you want to hear the rest. The twin guitar harmonies and the flashy solos will take you back to the time when you first discovered heavy metal and fell head over heels in love with it, because we all kind of started that way, didn't we? At the same time, Afterburner is a worship of everything '80s and the best example I can give you is "Mach Speed Running", which is essentially Falco's "Rock Me Amadeus" on heavy metal steroids.

Just like most bands that are currently jumping on the traditional heavy metal bandwagon, variety is almost non-existent throughout the album. Afterburner flows effortlessly and does not overstay its welcome, but none of the songs stands out character-wise; nearly all of them are extremely memorable and have the ability to get stuck in your head long after you've listened to them, but the songwriting is one-dimensional. At the same time, the tribute to Judas Priest's Screaming For Vengeance and Defenders Of The Faith era can sometimes get a bit too much, at least that's what I thought when I heard the intro of "Jawbreaker" upon the first notes of "Cold Blood".