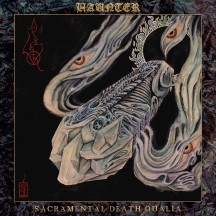 
Once again, the artwork of Elijah Tamu has been responsible for luring me into another awesome band discovery.

Hey, I can't help it, the guy makes some amazing stuff. Anyway, the recent recipient of his gorgeous album art would be the Americans in Haunter. This year's Sacramental Death Qualia sees the band somewhat stepping away from the crusty black metal style of their debut album, instead focusing on a chunky, melodious black/death combination. The underscores of melody in particular are what really seem to make the music of Haunter a lot more dynamic here than it was previously, as with the greater variation in mood and atmosphere it seems to have matured a bit more and as though the band have really started coming into their own songwriting-wise. Opener "Dispossessed Phrenic Antiquity" is as good an example as any of this evolved sense of composition: meaty and riff heavy, but also with an underlying sense of ambiance that helps give the music a much more emotive edge.

Indeed, with Sacramental Death Qualia Haunter really seem to have upped the ante with both the diversity of their songwriting as well as the pacing of their compositions. The transitions from the heavier to the more relaxed and airy parts of their songwriting feel smooth, coordinated, and well planned. The increased focus on atmosphere really seems to be the key here, as it even resulted in a track that's almost entirely ambient-ish with none of the heavier, riff driven elements featured ("Abdication"). Additionally, the sense of production here is a good step up from that of the debut as well, feeling a lot crisper and more polished and as though it allows for a more comprehensive take in of all layers of the songwriting than before.

With Sacramental Death Qualia, Haunter have taken a formula that was already quite enjoyable with their debut album and made it more dynamic and engaging with a better sense of flow and an increased variation in tempo and mood delivery. The result is a well written, attention grabbing album that deserves a listen from fans of moody, atmosphere driven black and death metal.

Written on 09.10.2019 by
Apothecary
Comforting the disturbed and disturbing the comfortable since 2013.
More reviews by Apothecary ››