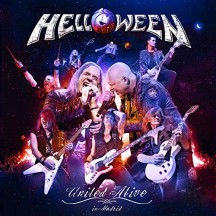 
In 1984 in Hamburg, one of the most important European power metal bands was born. More than three decades later, egos were left aside and a 7-member line-up toured around the world in a live reunion that, until then, seemed to be a possibility only in Helloween fans' wettest dreams.

Live albums in general are lame for two main reasons: a) because the setlist is nearly impossible to please everyone, and b) because a live recording can never convey the magic of actually being at a live show. United Alive In Madrid features almost every track a Helloween fan would want on a live album, but it also manages to capture the atmosphere of what must have been an incredible experience. Unfortunately, I did not attend one of these shows, but listening to this album makes me think that I'd donate one of my kidneys to have been there.

United Alive In Madrid finds the current Helloween line-up on stage with the addition of Michael Kiske and Kai Hansen. While this reunion is a dream come true, I would have also liked Uli Kusch and especially Roland Grapow to have been there. In any case, the musicians that are on stage give their best performance on the songs that they were part of in the studio recordings but also on those that they weren't. It's great to listen to Andi singing Michael's parts and vice versa, as well as Kai enjoying not only the songs he wrote for Helloween but also the ones that were crafted after his departure. There is a sense of respect for each other's contribution in the band's legacy on United Alive In Madrid. There is great interplay between the two vocalists in particular, and they keep the crowd on fire throughout the whole set. The way the ballads "Forever And One" and "A Tale That Wasn't Right" are executed back to back showcases the perfect marriage between two very different and very talented vocalists.

The focus of the album's tracklist is mainly on the band's '80s era and quite rightly so. Helloween, Walls Of Jericho and the two Keeper albums are among the top releases in the history of the genre, but this does not mean that there aren't enough favourites from the Deris era. People may notice that albums like Pink Bubbles Go Ape and The Dark Ride are under-represented and others have been completely ignored, but I can't think of one Helloween fan complaining about the inclusion of any song on here (except maybe "Rise And Fall"?). The sequence of the tracks is also well thought, mixing nicely those that were first sang by Kiske with the post-1994 ones, and there is also a four-track medley sang by Kai on the first CD.

So, what do you need from a live album? An energetic and responsive crowd (✓), fantastic performances by all musicians involved (✓), and a stellar and cohesive tracklist (✓). It's all here, even the new track "Pumpkins United", which is closing the third (bonus) CD in a celebratory atmosphere. It may not be Helloween's best track but it is catchy and uplifting and does its job well in capturing the whole essence of this reunion. I only hope Ingo were somehow able to listen to this; or, even better, be a part of it.

"Here we are, here we go
Shout it out, let them know
We're a light in the dark
Pumpkins united we are"