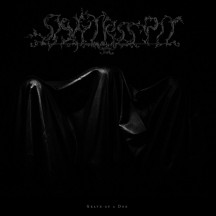 
There's been a lot of camaraderie established between Full Of Hell, The Body, and Lingua Ignota over the past several years. It was only inevitable that their members would eventually form a new band together.

Sightless Pit features The Body drummer Lee Bufford, Full Of Hell vocalist Dylan Walker, and Kristin Hayter, AKA Lingua Ignota. The sound on this Grave Of A Dog debut is fortunately pretty new, and it isn't overly similar to any prior material from either of the three bands of the parties involved. More than anything it seems like a fusion of the sounds of The Body and Lingua Ingota, the dense, synth-heavy darkness of the former mixed with the epic, almost operatic approach of the latter There's little to none of the Full Of Hell grindcore ferocity here, and it would be somewhat inaccurate to call Grave Of A Dog an "aggressive" release. On the contrary, the music here is more on the slow, hypnotizing, and ritualistic side of things, grounded predominantly in industrial territory and largely defined by the presence of swirling, otherworldly electronic effects.

Being mostly a droney electronic/industrial record, one might be tempted to think Grave Of A Dog would be a rather monotonous listen, but there's actually a pretty pleasant amount of variation in delivery across its 40 minute run time. Some tracks, especially "Immersion Disposal", are quite catchy, employing a pounding, rhythmic approach. Others, like "Kingscorpse" or "Miles Of Chain" are a lot grittier and lean more toward the harsh noise end of the spectrum. And further still, some are surprisingly melodic, giving in more to the Lingua Ignota presence and featuring more of a neoclassical approach topped off by Kristin's magnificent clean vocals.

The only real complaint I think could be leveled against Grave Of Dog is the fact that, for a band featuring members of Full Of Hell, The Body, and Lingua Ignota, there really isn't much of a Full Of Hell presence here. But in a way it almost feels as though that would have been somewhat out of place, and the album seems to work a lot better as a slow burning hypnotizer than it would as a fast paced, frantic banger. There's a lot of talent and a whole heap of various genre influences between Dylan, Lee, and Kristin, and here they do quite an excellent job giving listeners a taste of it. Impressive as it is, however, Grave Of A Dog somehow feels as though it's only slightly penetrated the surface of what these three are capable of when you put them together, almost as if it's merely a teaser for greater things to come. But if it's a teaser that is already this good, that only raises the hype even higher for where Sightless Pit may go from here.

Written on 04.03.2020 by
Apothecary
Comforting the disturbed and disturbing the comfortable since 2013.
More reviews by Apothecary ››