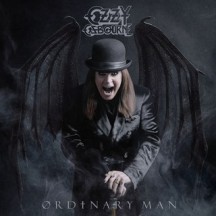 
So the dude on that Post Malone song actually came out with an album of his own, huh? How kind of Postie to give this man a career!

Hold on, it turns out that Ozzy Osbourne is actually one of the most important metal musicians of all time? Who would've thought!

Jokes aside, it's hard to believe that the man is over 70 years now, and it seems like every other day you see some news about his frail health. So we have to live with the constant fear of him passing every day and this being his final record. And you can really tell that he is the one that has to live with this too. Ordinary Man bears that weight, but other than that it isn't really a "necessary" album, but then again, neither were the past 20 something years of Ozzy releases, but I still found some enjoyment in them anyway. Actually as hard as it is to believe, for a short while when I was around 13, I thought "Crazy Train" was the best song ever and Randy Rhoads the best guitarist there is. Ozzy was the first metal artist (local bands excluded) that I've seen live. As much as I've grown and I don't find his solo career that good anymore, I still have a soft spot for it.

I mean, the man is already a legend with a huge legacy. The very first metal album, stories about snorting ants, literally more drugs than should be humanly possible, biting a bat's head off, urinating on the Alamo, having his own yearly festival, his own reality show(s). What a fucking life. And the man knows it, as he put it in the title track's video. And I can go on and call his album "not good" or something, but as bad as it can be and I as much as I could criticize it, it still feels like nothing compared to his legacy, and how happy I am that we did gen a final Ozzy record, so maybe it was actually necessary in a way.

That said, while I do enjoy the album, it's really not without its many flaws. The production is sterile, the guitar playing is wack (some of the solos are alright), Ozzy's autotune is pretty ridiculous since he really doesn't sound like an old man here. Honestly I do wish that with all the sentimentality of an old man looking back at his life, it would let some of that old seep through. A lot of the lyrics that don't go in the sentimental direction, are really ridiculous and fun, perhaps too much so, but who the fuck is gonna stop Ozzy now? He even put that song he guested on the Post Malone record as a bonus track, so if some Postie or Travis Scott fans somehow give Ozzy Osbourne a chance and get to some Black Sabbath I'd be more than happy, since I doubt a lot of Ozzy fans would suddenly jump ship to listen to Astroworld or Hollywood's Bleeding. But honestly both songs with Post Malone are bangers. I'm so glad I get to live in a world where we have Ozzy Osbourne, Post Malone and Travis Scott on the same track. What's next? Rod Stewart and ASAP Rocky? Zack De La Rocha and Run The Jewels? Soon you'll see Bruce Dickinson guesting on a Migos track. And it's gonna slap.

Of course it's a bad album, but I'm still pretty glad it exists, even though I doubt I'll drop by too often even if I'm always afraid of seeing Ozzy's eulogy somewhere. I just hope that he's not in pain as long as he's still with us. Thank you for everything!

Written on 13.03.2020 by
RaduP
Doesn't matter that much to me if you agree with me, as long as you checked the album out.
More reviews by RaduP ››