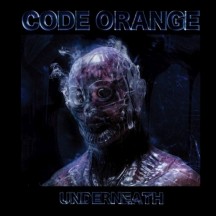 
I would want to call this the nu metal comeback we were all* waiting for but for some reason the record is skipping even if I stream it.

Code Orange have definitely risen to be one of the most popular bands in mainstream metal as of late, at least in terms of bands with less than 15 years under their belt. They were formed in 2008, but they started young (they were even named Code Orange Kids for a long while) so they're still young twelve years later. That is something that can be felt in their music, both a somewhat youthful energy and a desire to shake things up and try new things. 2017's Forever seemed to climb them on top of the metal world, adding plenty of electronics and some almost radio-friendly moments to the usual hardcore mix. Now Underneath comes and pushes all of those to 11.

Not only are electronics much much more prevalent than before, to the point of pushing this to the somewhat misused "industrial" label, but they took their "stop moments" to a somewhat undesirable extreme, as in what before felt like a moment where your heart raced for the riff to come back now feels glitchy, but not in a way that feels like it does anything but harm to the music. But the constant electronics, some that sometimes even border on power-electronics, combined with the hardcore riffs and the alternative leanings do create a sort of nu-metal-nostalgic sound. Quite akin to Vein's Errorzone, taking that older sound and re-contextualizing it, Underneath is definitely the more ambitious of two, as well as the one with the most catchy clean choruses.

Undearneath leaves a lot more room for the alternative rock leanings than previous records, with Reba Meyers' vocals taking more space than before, something I definitely appreciated considering how much I loved "Bleeding In The Blur" from the previous album. Their hardcore moments are often infused with some alternative undertones, but they also divert from those into full on alternative metal. This isn't to say that the hardcore ...uh... core of the album is neglected or that it isn't full of neck-breaking riffs and vicious vocals. Code Orange could've made a damn good record sticking just to that core, but they were ambitious enough to push it. Not every choice paid off, and the production can sometimes be too polished for its own good, but kudos to them for landing the budget to afford it.

Overall, this is the kind of record that makes me think "Hey, maybe nu metal wasn't that bad". Of course that Code Orange have the hindsight that allows them to only take nu metal's strengths while leaving behind most of its weaknesses. Despite the core/alternative/industrial/nu combination is almost guaranteed to land them a lot of mainstream attention, it's not like they completely played it safe either. Pick your poison.

Written on 31.03.2020 by
RaduP
Doesn't matter that much to me if you agree with me, as long as you checked the album out.
More reviews by RaduP ››