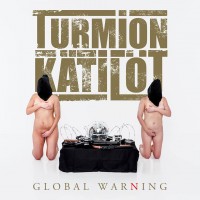 
I'm no fun at parties anymore, but I've never been invited to a party quite like this one. I'm quite certainly better off just listening to it, though.

While it's industrial metal at heart, the tag "extreme disco metal" would do this music more justice - the kind of disco you might find yourself at as the sun starts to rise after a night of heavy drinking, innumerable uppers acquired from your shady acquaintance's shady acquaintance, and an overdose of research-chemical Viagra, that is.

Since releasing their "Rammstein-on-MDMA"-tinged debut album, Hoitovirhe (Malpractice), 16 years ago, Turmion Kätilöt (Midwives of Doom) have departed from their Neue Deutsche Härte upbringings to craft a sound of their own - which I would describe as an extreme metal version of the sorts of party tunes I faintly recall hearing at the elementary school "discos" in the late '90s - becoming one of the most well-known metal bands in Finland in the process.

Here, you will hear none of the baritone vocals associated with the aforementioned German superstars but rather a mix of rhythmic black metal screaming and gruff, sometimes melodic not-quite-growling playing off each other, courtesy of vocalists Shag-U (yes, really) and MC Raaka Pee, respectively. Global Warning is Turmion Kätilöt's first album since getting signed to Nuclear Blast and starts off with "Naitu" (Fucked) setting the stage with an EDM synth line soon exploding into a pumping kick beat accompanied by ringing guitar chords. Turmion Kätilöt's two vocalists soon enter, taking turns to bellow out their depraved yet still quite thoughtful Finnish lyrics about sex, corruption, love, and human nature at a breakneck pace.

"Piinani valuessa reidelläsi / Me olemme niin kauniita / Haureutta, himoa ja valuuttaa / Ei uutta ennen kun on entinen naitu"
("As my torment trickles down your thigh / We are so beautiful / Lewdness, lust and money / A new one only after fucking the former one")

What this band lacks in subtlety and good taste they more than make up for in sheer entertainment value. Mostly every song on the album contains female backing vocals, adding melody behind the harsh singing, turning choruses into proper earworms. The songs are varied enough, with "Kyntövuohi" (Plowing Goat) showcasing thrashy riffs over a faster beat, "Sano Kun Riittää" (Say When It's Enough) shifting from serene singing to trance/dub-fueled shouting matches, and this reviewer's favourite track, "Kuoleman Juuret" (Roots of Death), with its pseudo-spoken-word verses serving to make the listener unprepared for Turmion Kätilöt to drop the catchiest chorus of the decade so far.

So, you might ask, what is wrong with Global Warning? Well, except for the tasteless cover art (anybody fancy a t-shirt?)... At nearly 50 minutes, this music has a tendency to wear out its welcome, especially as the band has contiuned [sic] with their experimental "To Be Contiuned" series of outro songs, this time in the form of "Mosquito Á La Carte" incorporating some salsa influences but as a whole just padding the album into tiresome territories. The slower tracks as well are well-enough placed in the track list, but they find themselves getting skipped over as I repeat this album. Somewhere before the tenth track, "Revi Minut Auki" (Tear Me Open), I tend to lose focus.

Extreme disco metal might not sound too enticing on paper (I wouldn't have thought so, had I not been a fan of Turmion Kätilöt since 2010) but the thing is sometimes I'm pining for the next atmospheric post-rock crescendo, sometimes I need my soul ravaged by the nastiest black metal imaginable, and sometimes I want to sit in amazement of a professionally composed prog opus. Mostly, though, I just want to have a damn good time and this album (while far from perfect) certainly scratches this itch. Catchier than chlamydia, cheesy as... fine, I'll spare both you and me the end of that train of thought. Check out the music video for "Naitu" below for a good example of Turmion Kätilöt's music and aesthetic style (NSFW).