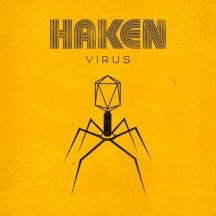 
Very unfortunate album title for the new Haken album, given the circumstances.

Frontman Ross Jennings has stated that the album title is completely coincidental and is related to the themes of the record, which are loosely connected to those of their 2018 album Vector. As such, I will stop talking about this unlucky turn of events and focus on the music that comprises Virus, the sixth full-length album from British prog metal band Haken. Of all the major new prog metal bands that made their name last decade, Haken are arguably the most classic-sounding when compared to genre heavyweights such as Dream Theater; eschewing the prog-metalcore sound of many djent bands or the atmospheric rhythm-heavy approach of Leprous, Haken's catalogue has featuring a number of super-long multi-part epics, heaps of lengthy guitar and keyboard solos, almost exclusively clean vocals and other elements. Whilst there's definitely been variations in approach on certain albums and songs (particularly their breakthrough record The Mountain with "Cockroach King"), the core sound has remained broadly the same since their debut, and that remains the case here.

Whilst several bands that gained a reputation in the prog scene during the same timeframe as Haken have softened up their approach over time (think The Contortionist and Leprous), "Prosthetic" kicks off Virus with one of Haken's heavier cuts. As I mentioned previously, there is a lot of Dream Theater in Haken's sound, and unfortunately one thing I find both bands share is that they are often at their least interesting when they push the heaviness. There's something about the way both bands approach writing fast crunching riffs that I find really flavourless compared with other heavy acts, and the riffs that dominate the first couple of minutes of "Prosthetic" have no real hook or bite to them, a whole lot of noise but no impact. Add in the "moody" verses and toothless chorus, and I have to say I strongly dislike this track. Mercifully, Virus vastly improves once this song is over.

"Invasion" may not have the "bang" factor of "Prosthetic", but I would have much preferred it to be the opening track on Virus, and will likely make it a point to start with it on any subsequent playthroughs after writing this review. Between the potent mood in the suspenseful vocal sections, excellent work behind the kit from Raymond Hearne and complex use of rhythm during the lead guitar sections, "Invasion" is moving and multi-faceted, and instantly turns Virus into a more intriguing product. Next on the record is the 10-minute centrepiece of the album, "Carousel", a song which manages to bring heavy riffs that actually carry some weight and appeal to them, helped in part by the way keyboards are used to complement them. "Carousel" is already amongst my favourite long songs by Haken, with some really nice vocal harmonies and seamless flow between its various phases, and demonstrates the band at their proggy best (I particularly enjoy the combo of ascending guitar leads with tom-heavy drum fills near the end of this track). Less proggy but similarly enjoyable are "The Strain" and "Canary Yellow", the latter of which is perhaps uncharacteristically docile for the band but gives Ross Jennings a good opportunity to show off his softer side.

The second long song on Virus, "Messiah Complex", is broken up into several small tracks, some of which call back to "Cockroach King", and I have to confess that this track at times undermines the good work the previous songs did in reversing the negative first impression set by "Prosthetic". The first few phases are fine enough (I rather like opening segment "Ivory Tower"); however, as it progresses, it falls back into the kind of 'style over substance' instrumental excess that has been used as a rod to beat prog with by naysayers for decades, particularly during "The Sect", to the extent that I struggle to sustain interest in the remainder of the record. Some might find it ironic for me to be decrying songs on Virus for being 'too heavy' or instrumentally excessive after my lukewarm opinion of Leprous's departure from prog-metal in the form of Pitfalls last year. All I'll say is that in principle, I don't care if a band makes their sound heavier or lighter, or moves to a new genre altogether, as long as I find the music they produce compelling; I just don't think "Prosthetic" or "Messiah Complex" show Haken at their best, unlike "Invasion" or "Carousel", both of which I feel stand shoulder-to-shoulder with the band's best songs.

As I've become increasingly attracted by newer approaches to heavy prog music, the more classic sound of Haken has lost some of its appeal to me. Virus isn't going to reverse that, but I still enjoyed the album more than its sibling record Vector. Nevertheless, it's not going to be the most notable virus of 2020.

Written on 08.05.2020 by
musclassia
Hey chief let's talk why not
More reviews by musclassia ››