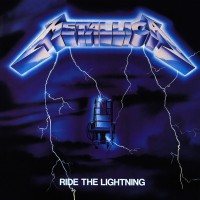 
Metallica's second effort, called Ride The Lightning, was released in 1984. The American band verged it in an international scale, projecting that the real brutality is not merely limited through fast tempos, and other musical procedures can be tested.

Ride The Lightning widely presents musical and lyrical progress, with more mature songs than Kill 'Em All. Metallica consciously developed more political and social lyrics; the songs are not about metal music itself, demonic contents or violence anymore. Solos are better-shaped and riffs are impeccable, and most importantly bass lines won't leave any space for critics.

"For Whom The Bell Tolls"'s intro with the distorted bass sound beside a wah-wah pedal, marching drum and fatal atmosphere is one the best tracks of this album, visualizing war pictures. Metallica took the risk of producing a ballad ("Fade To Black"), and certainly this was a new door of thrash metal to be unlocked, maybe not by Metallica for the first time but it was a huge impact on this path.

"Escape" is the most underrated track of this record, reflecting anarchism, and full of dark moments and finally a perfect ending going hand in hand with a whining siren and a savage riff. "The Call Of Ktulu" is Metallica's first instrumental track, written mostly in minor chords producing a mysterious tone.

The production is not faultless but far better than Kill Em All; moreover, the atmosphere that can be found in this record is completely related to the theme of the album.

Can we say this is one of the best albums of thrash metal history? Surely yes. Metallica did a great job in producing something valuable and inspiring, and held the torch for many other bands in this genre. The whole package is an example for real 80s untamed metal and thoroughly recommended.