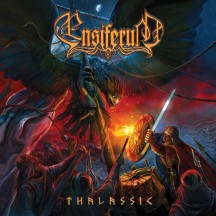 
After a fairly inauspicious decade, folk metal giants Ensiferum show signs of rekindling some of their former glory.

Pretty much anyone with interest in the folk metal scene will be at least somewhat familiar with Finland's Ensiferum, primarily from their impressive duo of records with Jari Mäenpää of Wintersun fame, but also the first couple of records they released with his successor on vocals (Petri Lindroos, formerly of Norther), particularly 2009's From Afar. Since then, however, reception towards their subsequent slew of releases has been very muted. Whilst records such as Unsung Heroes and Two Paths weren't actively bad, they felt like forgettable rehashes of their earlier work. In an effort to combat this staleness, Ensiferum have mixed things up somewhat on Thalassic, generally to good effect.

The main big change here, and the one that has inspired the most commentary, is the introduction of Pekka Montin to the band on keyboards and vocals, and although not everyone may feel the same, I consider his vocal contributions by far the strongest element of Thalassic as far as rejuvenating Ensiferum goes. Compared to the bland mid-ranged clean vocals that occasionally appeared on Two Paths, Montin's soaring cleans enter similar territory as Geoff Tate and Michael Kiske's 80s heydays. On the energetic pirate metal opener, "Rum, Women, Victory", a track already elevated by some memorable, frantic guitar lead riffs gets taken into Helloween territory when Montin first appears midway through, culminating in a rousing first blow that outshines previous openers such as "For Those About To Fight For Metal" or "In My Sword I Trust". Similar power metal vibes seep into "The Defence Of The Sampo", a track that goes all-in on the clean vocals to good effect, particularly during its emphatic climax, in which Montin gets to unleash his full range.

On the topic of the Sampo, Ensiferum take an unprecedented level of inspiration from Kalevala specialists Amorphis on Thalassic, with "Andromeda" and particularly "For Sirens" owing a lot to their esteemed compatriots. The folky lead guitar melodies of "Andromeda" are instantly memorable, and the low-range counterpoint clean vocals in the chorus seemingly simultaneously channel Tomi Joutsen and Kiske. Whilst there are resemblances in this track, "For Sirens" outdoes it in terms of Amorphis-isms, right down to the key modulation for the final chorus. If anyone thinks this is a criticism, it's not intended to be; I'm a huge Amorphis fan, and I feel like the introduction of these influences from groups such as Amorphis and Helloween have added a desperately needed spark to Ensiferum's music on Thalassic. The streak from the beginning of the record up to "For Sirens" is the most compelling Ensiferum has sounded in a long time.

This streak takes up over half the record, and emphasizes another strength of Thalassic, namely its brevity. Compared to the bloat of recent records (Unsung Heroes had no business running over an hour in length), Thalassic weighs in at a lean 43 minutes, meaning there's little room for filler here. However, after "For Sirens", I do have to say the double-header of the slow, lengthy "One With The Sea" and super-folky "Midsummer Magic" does curtail some of the momentum the record builds up until that point. I can see them appealing to others, but personally I find myself losing focus during this 10-minute stretch of the album, before "Cold Northland (Väinämöinen Part III)" saves the record from ending on a bum note. Ensiferum, despite their other issues, have demonstrated themselves capable of writing engaging lengthy tracks on recent records, and whilst "Cold Northland" doesn't approach the 17 minutes the band somehow managed to eke out of "Passion Proof Power", it makes full use of its extended runtime, moving through a series of segments before delivering a solid chorus to round out the record.

Overall, Thalassic is a successful first outing for Montin in Ensiferum and a sign that the group might at last be changing course for the better. Despite the overall positivity of the review, I don't think it's quite the knockout hit some have suggested it to be (although I must confess that I'm nowhere near being the world's biggest Ensiferum fan), but the fact that I can see myself potentially revisiting it in the future is a very encouraging sign given their recent output, and if they can continue to explore the new elements and influences woven into Thalassic on future releases, I'll be intrigued to see where these elements take them.

Written on 14.07.2020 by
musclassia
Hey chief let's talk why not
More reviews by musclassia ››