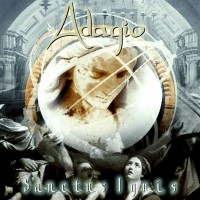 
Who knows Adagio? I hear no answer here but you don't know what you miss guys and girls! Adagio is a band with an amazing guitar player called Stephan Forte [he's French] who has gathered great musicians in this band such as Dirk Bruinenberg, the drummer of the prog band Elegy.
But the original touch of the music played here is that it sounds very orchestral. In fact, a real orchestra is playing on background and the mix between metal and classic is gorgeous. Among piano, keyboards and guitars parts, a special feeling is spreading into your mind: 'this is good'! The incredible thing is to know that the singer is David Readman, singer of ... Pink Cream 69! Nothing to do with prog metal. However, his voice is fitting very well on the melodies and you can't deny that he is a good singer, whatever you could think of its own band...

With 'Second Sight', you directly enter in the Adagio style: piano, choir and great guitar lines in frontline. 'The Inner Road' sounds maybe a little more aggressive but the basis remains the same along with its huge chorus. 'In Nomine...' is closer to Beethoven's sonata than to a real metal melody but the result is awesome. Of course, if you don't like Beethoven, so you won't like it! My favorite song is 'The Stringless Violin' with its magnificent piano intro and again a huge chorus... My God it's fuckin' great! Another highlight of the album is the eponymous track 'Sanctus Ignis'. It's maybe the more powerful song of the album. All other tracks sound unique with a very good guitar solo by mister Forte on 'Panem et Circences'. What about 'Immigrant Song'? The Led Zep 'cover' - it's a very personal cover - is instrumental and very progressive. Everyone has to make his own opinion on this track.

Maybe your first impression would be that it sounds like a Symphony X clone, but it's just a first impression. Listen carefully and you will found the thing that makes the difference between Adagio and Symphony X! Anyway, this album is full of good ideas and it totally rules! If you're addicted to Symphony X or Vanden Plas melodies, be sure that Sanctus Ignis was written for you!!

Written on 28.08.2003 by
Dream Taster
Bringing you reviews of quality music and interesting questions such as: