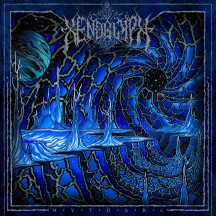 
Seeing how successful this year's cosmic death metal was, cosmic black metal decided it couldn't let it win 2020 without a fight.

Quite akin to Cryptic Shift this is also a band's debut full length, but this time we have no previous material, and, in true black metal fashion, also no information about who the duo behind Xenoglyph are. What the hell am I supposed to write in my self-imposed "context info" paragraph? I was lucky enough to review a similarly cosmic album of a different genre right before this one, so I could make up a comparison. Well, I think we'd better just skip to the music on Mytharc.

Cosmic black metal generally comes in two recipes: the cold atmosphere of space's void (see Darkspace, and intergalactic forbidden knowledge of life's past and future. Quite akin to most cosmic death metal (back at the comparison, sorry), Xenoglyph opt for the latter, and a huge chunk of that is just the album's aesthetic, from the frosty bun nonetheless cosmic cover art, to the album's description on Bandcamp, which is almost a better review for Mytharc than I could ever write. Mytharc "shows a unique sound in progress: one that is as bizarre as it is triumphant, as epic as it is psychedelic - a vanguard opus that demonstrates a reverence for the ancient, as well as a fondness for the futuristic". How am I supposed to compete with that?

And they're right about it. Mytharc is for the most part a traditional black metal record, the epic and atmospheric tinges as well as the title could lead you to believe at points that this is a Tolkien-inspired affair, but that's just the surface. Even though the core is traditional, Xenoglyph sprinkle all sorts of progressive and psychedelic sounds throughout the album, so much so that it tinges closer and closer to sounding avant-garde at times, one that is less about being dramatically out-there and more about finding unexplored sounds within traditional black metal's already well-charted territories. So calling this "avant-garde" might be giving wrong expectations, but it's not really a false label.

Perhaps this is Mytharc's flaw, it clearly shows a knack for both traditional black metal and for twisting said traditional black metal into a new form, but it's in a weird territory where I can't completely call it either of those. But very few black metal albums, regardless of how traditional they are, manage to achieve the atmosphere that is captured here, and part of it may be the production by Sorcier Des Glaces's Sébastien Robitaille. It may not be as bizarre and transcendental as I wish it were, but since this was apparently recorded in early 2018, maybe there's something already cooking that will fulfill its potential.

Written on 24.07.2020 by
RaduP
Doesn't matter that much to me if you agree with me, as long as you checked the album out.
More reviews by RaduP ››