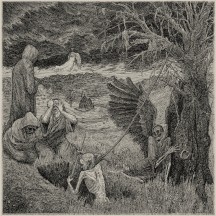 
Hey, do y'all remember Hell? No, sorry. Hell (USA), the American sludge band not the NWOBHM band. Anyway, the man behind it decided to use his pseudonym for this one instead of the usual band name, which probably means there's something a bit different this time around.

First, let me preface by saying that going by their Bandcamp is pretty much a mess, so don't blame me if it turns out that that ambient classical Cloud album is actually a M.S.W. album as well, or if that second Hell (USA) self-titled that Lord knows should rightfully be Hell IV is actually also a M.S.W. album instead. And why the hell are previous Hell (USA) albums having artist tags like "M.S.W. T.A.S. A.L.N."? And is it M.S.W. or MSW? Make up your goddamn mind. Anyway, rant over, don't blame me for the confusion. With that out of the way, just as the stuff under the Hell (USA) alias, the one under the M.S.W. one is some bone chilling doom metal.

But there's a bit of a twist. The sound this time around is a lot less on the sludge spectrum and a lot more on a more conventional doom one, as much as I can use conventional for this guy's music. There are still traces of the bass-heavy sludge at times, and the vocals are still mostly in the blackened spectrum, except for the angelic guest vocals that show up at times. Hold on. Angelic and Hell (USA) doesn't really sound right, even if the same types of vocals did show up in music released under that banner. And I lied, there are a fair share of clean vocals from MSW himself as well, and with the album going deeper into doom territories, there is a lot that has changes in the mood as well, with less anger and misanthropy and more despair and longing this time around. You can almost feel a bit of the influence that was taken from playing with Mizmor too. The instrumental palette changed considerably, with a lot of pianos and violins (maybe a bit of it owing to that "Cloud" album), especially on the "Funus" interlude, but seeping their way into the other tracks as well. The album culminates into an almost twenty minutes long title track that takes pretty much half the album, and that goes into almost post-metal like territories at times. In any case, this album feels like it pushed the heaviness from a punishing one to a more emotionally heavy one.

And it makes sense when you get into the background of this album. A lot of years in the making and detailing the struggle that MSW's brother has been having with drug addition and the toll this has taken on the family as well, it's not hard to see both why the change in tone and the change in banner was necessary. Not only is this a more outright personal album, but it's also one of the most melancholic... actually melancholic might not be a strong enough word for the pain that seeps from this album. The description explains the album title quite well: "Drugs that make you Oblivious to the pain it's causing elsewhere". In retrospect, this makes the previous Hell (USA) stuff suddenly have a larger depressive side to them, the anguish in the vocals and the emotions in the crushing tones become so much more apparent now. And with this in mind, it's always great when the closing track of the album, the "epic" one, takes all the previous elements of the album and makes them come together as one, and it really is the case here. And it feels like an even bigger culmination with this realization.

Oh, and the violins are played by Weeping Sores' Gina Eygenhuysen, and if you remember my review, that was some of the best use of violin in metal in a long time, and that's pretty much the case here as well. And not only are MSW's cleans surprisingly good, the songwriting not only does have an amazing ebb and flow, and not only is the emotional impact immense, but it elevates pretty much this guy's entire career. It feels futile trying to mechanically analyze what makes it great. It's sad. And it's beautiful.

Written on 24.08.2020 by
RaduP
Doesn't matter that much to me if you agree with me, as long as you checked the album out.
More reviews by RaduP ››