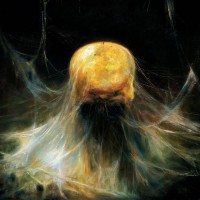 
Death doom often feels like a gothic type of doom that has growls. Jupiterian know that to make it crushing, you need to add a bit of sludge as well.

Before listening to Jupiterian, I was under the impression that this would be sludge first and foremost, but to my surprise, earlier Jupiterian albums sounded a lot like early Peaceville Three stuff, but with a bit more crunch. Makes sense, since they also covered one of the most underrated Anathema tracks on one of their EPs. But they thankfully never were content with sticking with either sound, nor with remaining just a pure blend. And Protosapiens proves that.

Not only is this album a tad less "gothic" than what I've heard from them before, without completely eliminating a sense of doom and gloom that the sound still has, but moving the barrier between death and doom a bit closer to the center. Also the sludge part of their sound is amped just enough to make Protosapiens feel more gigantic. And it's not like the cover art doesn't mirror that as well. I keep saying that there will come a time when I'll get tired of Lewandowski's art, but that keeps not happening yet.

A lot of bands are massive, crushing, melodic or emotional, but rarely all of them. And while Jupiterian certainly emphasizes some aspects over others, they still manage to make Protosapiens feel like each of those. Not necessarily at the same time, but what's most important is that the flow between the heavy crushing parts and the more mellow melancholic ones never feels forced, gimmicky or like too high a contrast. It all feels horrifying and humane, and like Jupiterian.

The sludgy tones of the bass and guitar fill the atmosphere with drowning feedback, but also with melody. The growls are either deep and somewhat gurgly, sometimes extremely imposing, sometimes filled with melancholy. The drumming from the new drummer, the only lineup change that Jupiterian has suffered so far, shines mostly when going in blast beats mode, which can happen both during the meatier death sections, but also during the dramatic doom ones.

Overall this achieved what bands can only dream of achieving, appealing to fans of multiple genres, in this case melodic doom, meaty death and crushing sludge, without feeling like they compromised any sense of vision and authenticity. It's purely Jupiterian's best album, not only because of its ambitious mix of feelings, but simply due to how skillfully it was crafted.

Written on 11.09.2020 by
RaduP
Doesn't matter that much to me if you agree with me, as long as you checked the album out.
More reviews by RaduP ››