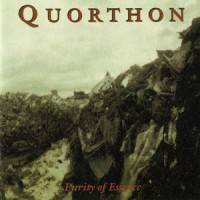 
Quorthon's tragic and definitely premature death made me look back over my Quorthon-related discography and remind myself of why I liked this guy so much. I am sure that one of the things this man is going to be remembered for is his various stylistic detours, some of them rather amusing. And this, ladies and gentlemen, is the most amusing one of them all!

Basically, it seems like Mr. Quorthon got bored of metal during the mid-90s and recorded a pair of 'solo' albums containing alternative metal somewhere between Nirvana and Therapy?. Now, this doesn't sound so bad, right? Its nice to see people experiment. Unfortunately, Quorthon seemed to fail to realize that his voice is not suitable for this sort of music at all! While his screaming was always great and his chanting, while not a thing of beauty was nonetheless suitable for the epic stuff he recorded, his attempts at crooning and carrying a melody are appalling! One has to understand that this sort of music, due to its simplicity, really relies on the vocalist to deliver an interesting and emotional performance. Quorthon is quite frankly completely unable to do this and ends up sounding like a goof ball instead. Luckily, there is a redeeming factor for the album - although an atrocious vocalist, Quorthon is nonetheless a very good guitar player and riffmeister and it shows here. Tracks like "It's Coming My Way", "Hump For Fun" and "Coming Down In Pieces" have wicked riffs which I am sure many alt. metal outfits would love to have stolen.

Although this album is almost completely unlistenable and filled with all sorts of cringe-inducing moments, I still like it. This is because its wonderful to see someone who is completely oblivious to what his work sounds like and just plays whatever the hell he wants and likes. This is a trait that Quorthon presented on numerous occasions ("Octagon" anyone?) and is something that other musicians should look up to. In a musical world which is controlled by corporations and show-business needs, it is very refreshing to see someone throw all this out the window and express himself in whatever way he wishes. Well, I am not going to be soft on "Ace" (as he is credited on this album) just because he is dead and I am not going to give this album a high score. A 4 is the best it deserves in objective terms. If I wanted to listen to this sort of music, I would always pick up any Alice In Chains, Helmet or Therapy? album before this.

Nonetheless...
In subjective terms, this album ranks a lot higher. It's fun to listen to, even if for all the wrong reasons... If you are interested in Quorthon's musical journey, I think this will be an entertaining, amusing and most of all fun checkpoint to investigate.

Written on 14.06.2004 by
jupitreas
With Metal Storm since 2002, jupitreas has been subjecting the masses to his reviews for quite a while now. He lives in Warsaw, Poland, where he does his best to avoid prosecution for being so cool.
More reviews by jupitreas ››