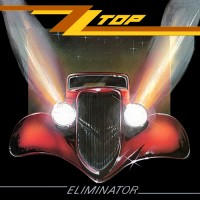 Texas good time boys ZZ Top made the leap from cult heroes to megastars with Eliminator. Carrying on the experimental stylings of El Loco, the band perfected the synth sounds, which, coupled with their bluesy southern rock, made them a force to be reckoned with. If you want a record that is fun to listen to, then look no further than Eliminator.

When you take a quick look at the track listing, your eyes are taken straight to "Gimmie All Your Lovin'", "Sharp Dressed Man" and "Legs". Yes, they are the most famous songs from this record, but Eliminator has plenty more in its tank and these three songs serve only as the cherry on top of what is an exceptional record. The heavy synth-laden rockers "Got Me Under Pressure" and "I Got The Six" rival the aforementioned trio in immediate catchiness, and while "If I Could Only Flag Her Down" and "Bad Girl" may not hit you as quick, they will grow on you in short order.

What do all these songs have in common? To varying extents, they all have synth elements to them that are blended expertly with the classic ZZ Top sound. Whereas in a track like "Gimmie All Your Lovin'", it lurks in the background to add a little extra flavour, on songs like "Got Me Under Pressure", it plays a central role; both songs benefit greatly from its addition. Gibbons' guitar is still the centre of attention and he continues showing why he is one of the greatest players of all time. Beard and Hill hold down the rhythm section with precision and flair, pushing the songs forward with entrancing rhythms.

Ham does a brilliant job marrying the synth sounds with the southern blues rock the band are renowned for; what could have so easily gone wrong is managed perfectly. Where the band could have easily been labelled sell outs, the strength of the material and the efforts of Ham behind the board mean that new and old fans will (likely) be pleased in equal measure. Yes, the synth work does sound very dated now 37 years later but in an endearing way. Where a track like "Legs" shows its age, it is not to its detriment and this is where the timeless quality of ZZ Top lies. Had the band gone further down the road of synthrock then yes, the record would be harder to redeem ,but instead it just adds its charm.

Where the record is let down from being a clean sweep is in "TV Dinners"; it is not a bad song by any means, and I love the blues licks Gibbons throws about, it's just that it feels out of place on the record. Had this song been on Afterburner, I feel both that record and Eliminator would have both benefitted greatly; the slow and minimal nature of the track just doesn't blend well with the other songs surrounding it here.

Overall though, Eliminator is an album that should come as standard with any new car, perfect for blasting on long drives, keeping you in a good mood and providing a upbeat companion as you ride down the road.

Written on 23.09.2020 by
omne metallum
Just because I don't care doesn't mean I'm not listening.
More reviews by omne metallum ››