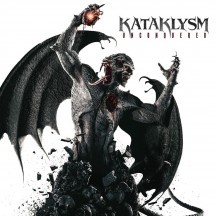 
The northern lights are shining again.

Unconquered is the 14th release from these Canadian crusaders, who have taken their brand of northern hyperblast from an odd combination of words to an identifiable sound to all those who've had the fortune to have listened to them. If you have yet to experience Kataklysm, I highly recommend listening to their earlier output first if you want to hear what the band are capable of when firing on all cylinders.

In recent years the band have had mixed fortunes in terms of their output; the transition from outright brute force metal to a sound that balances the inclusion of more groove-orientated, technically-minded tracks has been a mixed experience for fans of the band. This transition seems to be near enough complete with this album, seeing less focus on the band's cutting edge in favour of blending in more earworm elements to get under your skin. The band have proved themselves deft hands at the groove metal stylings in recent years, with tracks like "Under Lawless Skies" and "Thy Serpant's Tongue" showing doubters that they are more than one trick ponies.

Unconquered does follow in the same footsteps Meditations walked, a solid release with no single standout tracks, serving as another solid batch of songs to be added to the wealth of material the band have produced but with few outright classics among this latest grouping. That is not to say you won't enjoy the songs; far from it, I found tracks like "Underneath The Scars" and "Defiant" to be very enjoyable. However, the band suffer the lucky problem of having raised the bar so high prior that it is difficult to match it even when they produce quality material.

The band do err from their usual stylings, however, with the album featuring no movie quotes as is their custom; it didn't click immediately, but once I noticed it was something that I couldn't shift from my mind.

The biggest bugbear I have with Unconquered is the guitar tone; it is to guitars what 80's production was to drums, sounding mechanic and sterile with little character in them and sounding computer generated ("Cut Me Down"). Dagenais' newfound focus on technicality is a mixed bag; although he is an able and capable guitarist who has produced some blistering work before, he handicaps himself by not focusing on what he does best. He can play technical riffs with apparent ease, but it is not a touch on what he has been able to do prior. Take "Focused To Destroy You"; the tone seems ill-fitting with the music around it, sounding like it is sitting beside the rest of the band and not playing as part of the unit. Dagnais plays nothing wrong but he is ill-utilized here.

The production (Dagenais aside) is strong, balancing both elements of the band's sound with ease and not handicapping one side in favour of strengthening the other. Placing Payne at the back enables the songs to be rammed into your ear with Iacono shredding your eardrums as if he was in your ear himself. It does lack some warmth in its sound, however, with the sonics sounding as if it was created in a sterile lab than naturally made in a studio. Given that it is sacrificed in the name of highlighting the technical aspects of the band's sound, it is an understandable trade-off.

Payne does a stellar job on the drums, which are booming and with a bass drum that sounds like the vibrations coming off of it could rattle the screws of any nearby buildings loose. As is part of the Kataklysm sound, the drums are the real powerhouse of the songs, serving as an engine that revs up and pushes the rest of the music forward at a rate of speed only Formula One drivers are accustomed to, with tracks like "Underneath The Scars" and "The Killshot" bearing this trademark sound. As the band have progressed their sound in recent years, there has been an increasing focus on groove, which Payne is equally adept at playing on tracks like "Stitches" (where he makes up for the guitar sound) and "The Way Back Home".

With that said, Unconquered is an enjoyable listen, having several strong tracks among its running order; though they may not match the classics of prior, that does not diminish the quality of the songs themselves. When concerts are back in full swing, I can see the band easily fitting in some of these tracks into their set with little grumbling from the fanbase, and ones I would push myself closer to the front to hear.

Unconquered is unlikely to be anybody's favourite Kataklysm album, but it is a solid addition to the band's work. A good listen and one that people on the fence should lend their ear too.

Written on 07.10.2020 by
omne metallum
Just because I don't care doesn't mean I'm not listening.
More reviews by omne metallum ››