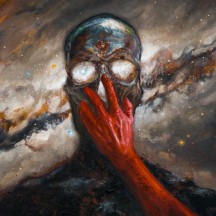 
A solid feast for the ears.

British metalcore crew Bury Tomorrow have been a band who often come close to boiling over before being taken off the heat, never being able to reach their full potential. It is a pattern that is unfortunately unlikely to be broken in 2020 with the release of Cannibal; with the album turning the heat up to max before snapping off the dials, Bury Tomorrow mean business in a year where there is none.

Choosing to zig where many of their compatriots have zagged, Cannibal is a guitar-centric dose of aggressive metalcore released while contemporaries such as While She Sleeps have embraced electronic sounds in recent years. The dalliances with such a sound on Black Flame are thrown out the window with tracks like "The Agonist" and "Gods And Machines" raising their middle fingers and providing the antithesis to this recent dalliance with electronic-infused metalcore, allowing the band to take more of the spotlight where others have vacated it.

Seeing the group up the intensity for much of the album, the band find a much blunter edge on which to base their latest offering, stripping some of the layers of production and shine that were on Black Flame and going for a slightly more raw sound instead. Daniel Winter-Bates' harsh vocals are the prime mover on tracks such as "Voice And Truth" in tandem with the heavier guitar tones of Dawson and Cameron, who stab the silence with piercing riffs ala "Cold Sleep" and "Choke".

Through this, however, the band retains their sense of melody and provide a greater contrast when it is placed in between the aggressive songs, such as "Better Below" and "Imposter". Cameron's clean vocals sit alongside the music and add a beauty and the beast-type duality to the album. By simply amplifying both aspects of their sound, the songs are more impactful and fresh than many of their peers without the need to embrace new ideas in order to breathe new life into their work.

Choosing to centre the album around the guitars proved to be a smart choice, as it rests your focus on the band's aggressive shift. Jackson's drums blast away, creating a wall of sound off which to bounce the rest of the songs, serving as sides to the tracks rather than a floor on which to rest everything else. Davyd Winter-Bates' bass, however, is reduced to a bit-part player for much of the album, being swallowed up by the rest of the band and pushed into the distance behind the guitars, leaving any fans of the four-string wanting.

The production style suits much of the songs on the album, with the exception of "Quake", which is hung out to dry as its slow-burning atmospheric style is not served well by the focus on the heavier end of the spectrum. While not being a bad track in and of itself, it doesn't sound like it should be on this album, and would perhaps have fitted better on the band's prior work.

As others vacate the space Bury Tomorrow occupy, the band seem primed to take full advantage of this newfound lack of competition and stake their claim to be the king of the hill; Cannibal is a hell of a statement of intent, and one that may well ensure that they stay atop the mound for years to come.

Written on 09.10.2020 by
omne metallum
Just because I don't care doesn't mean I'm not listening.
More reviews by omne metallum ››