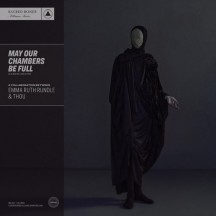 
I never expected Emma Ruth Rundle and Thou to work that well together.

Thou's residency at Roadburn festival wouldn't have made sense in any other edition other than the one in which the band released its series of EPs preceding their actual full length, Magus, one of them acoustic, one of them alternative, one of them dronier; to prove that there was much more to the band than just angry sludge and angry sludge covers (we got even more of those in the meantime). Other than a normal set, an acoustic one, a secret Misfits cover one, there was one that was a collaborative set with none other than Emma Ruth Rundle. Being a bit appalled by the odd pairing, I of course just had to see it, especially since I was also lined up to interview both of them. You maybe already read about it.

I had doubts about this one, and for good reason, since the sounds both of these artists have don't feel like the kind that could seamlesly blend together. Thou sounds like crawling through broken glass and Emma Ruth Rundle sounds like someone telling you that everything will be alright when you know it won't. But Thou have proved their versatility with less pummeling music, and it's not like Emma Ruth Rundle is a complete stranger to heaviness, so there is a lot of common ground. And the artists did find a lot more common ground by appealing to their shared love of 90s alternative rock, particularly of the grunge kind, and also of really slow and moody atmospheric music that could lean both into the dark folk or the sludge sounds.

Of course there are still some "oil and water" moments throughout the album, because May Our Chambers Be Full puts a lot of effort into not sounding like Thou with a new vocalist or Emma Ruth Rundle with a new backing band. By refusing to go the easy way and trying their hardest to make the most of both artists' sounds, there are moments when they don't exactly play to their strengths. It was always going to be like this, but the for every awkward moment in the blend there is so much more that is worthwhile. Emma being a guitarist herself makes the atmosphere of this album very guitar-centric, and her more morose and whooshing style seems to have embedded it a bit in the heavier DNA of Thou usual crushing sound.

Likewise hearing said crushing sound as a backing for her ethereal vocals also makes Bryan's tortured vocals feel like an extra instrument some of the time, especially when the two vocalists weave their voices. There are moments when Bryan's vocals take center stage, like on "Magikal Cost". There are even moments, like on "Monolith", when Thou's KC Stafford assumes vocal duties as well, and their clean vocals seem like a fitting alternative to Bryan's gurgling and Emma's sultry ones to expand the palette even further. For the most part each of the parties manage to drag the sound of the other into a wall of guitars and emotional heaviness. I do feel that a lot of the moments where one of the two feels more in control of the sound feel a bit more natural, like the first half of "The Valley", but the moment that Thou make their mark on that one, it makes the whole collaboration worth it.

Overall May Our Chambers Be Full seems like a continuation of both Emma Ruth Rundle's return to a more expansive band sound after years as a solo artist, and of Thou continuing to expand their palette beyond sludge, but also for their love of where they're both coming from musically, their shared DNA so to say. Not everything merges flawlessly, but its imperfections only amplify its daring nature.

Written on 02.11.2020 by
RaduP
Doesn't matter that much to me if you agree with me, as long as you checked the album out.
More reviews by RaduP ››