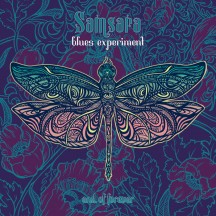 
I thought that I was done with reviewing in 2020; Samsara Blues Experiment apparently felt differently.

Last month saw the mixed news that German psychedelic/stoner outfit Samsara Blues Experiment would be releasing a new album, but that it would be their final album prior to taking a hiatus. Samsara Blues Experiment are arguably the most internationally renowned product of the German psychedelic/stoner scene outside of Colour Haze, and my encounter with 2017's One With The Universe made it clear why; it was an excellent album that cracked my end-of-decade top 100, with lush, twisting psychedelic jams, featuring both vibrant stretches and periods of melancholy. As such, it was sad to hear that they would soon be taking a break; however, that news stated that this impending album, End Of Forever, would be released in January 2021, so I was a bit surprised when I randomly searched the album today and saw that it was already streaming on Bandcamp. Having given this late Christmas present a few spins, I can report that SBE signed off with a bang.

The formula is much the same as on their previous album: lengthy jam-based tracks featuring substantial psychedelic instrumental meanderings, with both the guitar and keyboards getting plenty of opportunity to shine. Within these jams, however, Samsara Blues Experiment are more than capable of crafting well-planned songs, with the LSD-drenched vocals of Christian Peters fitting seamlessly into the songs' more structured sections. "Second Birth", the only track here to run over the 10-minute mark, makes for an excellent opening to the track, carrying some of the subdued melancholic vibes of One With The Universe's title track as the bass powers beneath the shimmering synths and warbling electronics, running for over half its runtime before transitioning into more of a song as Peters' vocals and guitar join his keyboards. Between a tasteful guitar solo and some powerful riffs to close the song, the second half of the song sees the guitar, very much in the background during the first few minutes, take centre stage for a rousing climax.

"Second Birth" is arguably the strongest track here, with closing song (excluding the bonus track) "Orchid Annie" its major competition, meaning that End Of Forever is bookended by its best moments. "Orchid Annie" features grandstand guitar solos, not necessarily technical, but positioned in the mix as to really grab the listener's attention, as well as some of the most sumptuous jams present on End Of Forever. Between these two songs, listeners are also treated to the hippie acoustics in "Massive Passive" and "Lovage Leaves", the busy percussion opening "Southern Sunset" and the heavy, hazy journey that follows, and the brooding nature of the title track.

I don't think there's quite enough here for it to surpass One With The Universe, which I feel is a bit more consistent in contrast to this album having two clear standout tracks, but it still makes for a strong send-off, whether temporary or permanent, for one of the strongest bands in the heavy psychedelic rock scene. It's completely understandable that the trio that have comprised this band from its inception through to now might appreciate a break from it after over a decade together, but it's nice that they were able to offer up one more triumph before they went rather than ending with a flop.

Written on 30.12.2020 by
musclassia
Hey chief let's talk why not
More reviews by musclassia ››