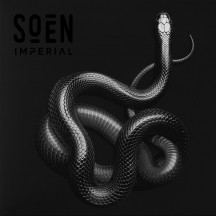 The Soen project, initially framed as a super-group of sorts due to the involvement of the likes of Martin Lopez (ex-Opeth) and Steve DiGiorgio (Testament, as well as a litany of well-known former bands), was founded in 2004, but only dropped their debut in 2012. Cognitive was a promising start, but one that drew fairly blatant inspiration from Tool in particular, as well as Lopez's former band. Less than a decade later, Soen are now five albums deep into their career (excluding the Lykaia Revisited release), and have managed to put a lot of distance between their sound and their initial influences, building a strong reputation for themselves in the process. Hell, 2019's Lotus beat Tool's long-awaited comeback album Fear Inoculum in that year's Metal Storm Awards. Following hot on the footsteps of Lotus comes Imperial, an album that should serve to enhance the group's growth.

Lotus was extremely well received, even compared to the group's previous efforts. As such, those that fell in love with that record may not be quite as impressed with Imperial; however, as someone that wasn't totally on board the Lotus hype train, I think this new album is arguably an improvement on its predecessor. As mentioned in the previous paragraph, Soen have increasingly distanced their sound from that of Tool's; in contrast to the increasingly progressive and lengthy songs Tool have been writing since Soen's inception in 2004, the Swedish group's current version of alternative metal is very streamlined and accessible, with most tracks on Imperial being centered around memorable melodic choruses. There is a solid amount of heaviness across the album (the opening song "Lumerian" begins with a deceptively crunchy alt-metal riff), although it for the most part it only makes up patches of each song (the first 3 songs all feature sections of heavy riffing, but softer sections comprise the majority of all three tracks); as contrast, there are a lot of mellow verses with lush clean guitar work or satisfying grooves. And at the middle of it all is Joel Ekelöf, running the show.

Not to denigrate the efforts or abilities of the other members of Soen, who manage to write meaty heavy riffs and soothing softer songs, but Ekelöf's performances are what have really helped elevate the group above their peers over the past few years. The mixture of that soothing, evocative voice with these instantly memorable vocal melodies, particularly in the choruses but pretty much throughout, helps make every track on Imperial an enjoyable listen. Personal favourite parts for me are the choruses of "Lumerian" and "Dissident", but Ekelöf is the most enjoyable element of pretty much all the songs here, and is essential at making gentle songs like "Illusion" work so well.

But Soen is not just Joel Ekelöf plus a backing band; everyone makes good contributions here to craft songs that are satisfyingly composed and sufficiently diverse as to not overlap. The slick muted riffs in the vocal sections of "Deceiver" are immediately likeable, as is the punchy main riff of "Monarch", which is rhythmically complex but very hooky. Additionally, whilst I mentioned before that the heaviness usually comes courtesy of minor segments of each song, this doesn't apply to "Antagonist", which features a lot of punchy guitar work throughout, and even in its quieter moments features some very imposing drumming. Rounding off the album is probably the strongest song, "Fortune", a track that moves slowly but with a real sense of importance, and showcases some of Ekelöf's most impassioned vocals on Imperial, which work nicely in tandem with the stirring strings during the chorus.

Fans of Soen might be reading all this and wondering why my overall rating isn't higher. Honestly, as much as I find a lot of positives throughout Imperial, Soen have always been a band that I've found to be easy to like but not necessarily to love, and whilst certain tracks here, particularly "Antagonist" and "Fortune", do their best to change that, I don't find myself truly connecting with the likes of "Modesty" and "Monarch" (excluding the aforementioned heavy parts). There's something about the band's sound that I find to be pleasant (and increasingly so as their career progresses) but that doesn't fully emotionally resonate with me, and that hasn't been fully corrected by Imperial; nevertheless, if you are someone who already fully connected with their prior material, I can't see any reason why you wouldn't be similarly taken by this latest addition to their discography.

Written on 06.02.2021 by
musclassia
Hey chief let's talk why not
More reviews by musclassia ››