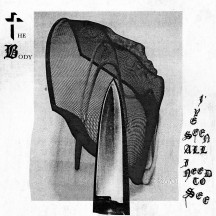 I should have known better, because here I am - and The Body isn't an illogical next step from the Mories reviewers club, because this duo occupies a similar space in my mind, being a highly prolific, esoteric, and idiosyncratic project that works in the realms of grimy, unorthodox, noisy music and enjoys great acclaim with a certain clientele here on MS while also attracting odd stares from the general populace. Sure enough, my first thought on hitting "play" was "is my media player terrible, or is the album just quietly seizing?" Even now, I'm not confident enough to say that I know which one it is, but after spending some quality time with I've Seen All I Need To See I've found it the most engaging of my experiences with The Body, and the way "A Lament" opens this album is certainly indicative of The Body's fascination with grinding against the grain, sputtering and stuttering in a direct attack on the listener's sense of rhythm.

Pitch is barely distinguishable within the rippling mangrove of distorted bombination that fills the bulk of each track; the brain-splitting screeches that periodically adorn the background could easily be malfunctioning equipment rather than human vocalization. When there is percussion, it is sparing, perfunctory, and ominous, letting a single or double strike echo for several beats without answer; when there isn't percussion, it's as if the limiters have been removed from that pulsating beast of noise, and the vibrating distortion threatens to claw its way out of the album and into the world. The crawling chaos that constitutes most of this album's being is so thick and low in frequency that it could snuff out the air in your lungs and steal your breath from you in an instant - "A Pain Of Knowing" especially captures that teeth-rattling wall of sound that can easily kill you if you turn the volume up just a notch.

Thus the album flows for the first several tracks, until we hit "The City Is Shelled," whose shocking snare hits crack like a volley of artillery fire; though the sound is still viscous and the pace accordingly restrained, it is here where the album turns into something more aggressive and coherent, with a real riff taking shape within the noise and a more directional progression within the songs. "The City Is Shelled" echoes the approach of the earlier tracks, but finally pushes the album into something more surreal and warped, not only harnessing those elements for the creation of a cognizable image, but evolving. And finally, once the city has been shelled into oblivion, a massive eruption of sound announces "They Are Coming" - now no longer confined to a small space and pushing against the barriers, but echoing in an empty, desolate chamber in which that city used to be. Slowly the album returns to what it once was, a largely formless tangle of thunder and lightning, but it has changed by the time it reaches "Path Of Failure," which dies to the tune of a furious drum explosion.

Of the several The Body releases I have encountered, I've Seen All I Need To See has proven to be the most exciting and potent. I have no idea what these words will mean to actual fans better-versed in this band's discography, but what I've gathered is that I have not heard all I need to hear.