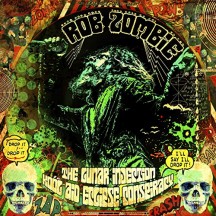 
01. Expanding The Head Of Zed
02. The Triumph Of King Freak (A Crypt Of Preservation And Superstition)
03. The Ballad Of Sleazy Rider
04. Hovering Over The Dull Earth
05. Shadow Of The Cemetery Man
06. A Brief Static Hum And Then The Radio Blared
07. 18th Century Cannibals, Excitable Morlocks And A One-Way Ticket On The Ghost Train
08. The Eternal Struggles Of The Howling Man
09. The Much Talked Of Metamorphosis
10. The Satanic Rites Of Blacula
11. Shower Of Stones
12. Shake Your Ass-Smoke Your Grass
13. Boom-Boom-Boom
14. What You Gonna Do With That Gun Mama
15. Get Loose
16. The Serenity Of Witches
17. Crow Killer Blues

Shock rock legend and horror buff Rob Zombie is back after his longest gap between albums to date, with his latest offering The Lunar Injection Kool Aid Eclipse Conspiracy coming five years since his last effort. While Zombie has been on a career renaissance as of late, this momentum comes to a grinding halt with an album that promises a lot but fails to deliver, seeing the horror show become all too real.

The Lunar Injection Kool Aid Eclipse Conspiracy is an album that shows potential and dangles it tantalisingly just out of the reach of listeners, who will find themselves distracted as they walk headfirst into the various pitfalls this album while reaching out for a track to make carrying on worthwhile. The album starts off promisingly, with the first half of the album featuring a host of tracks that are passable but lacking that elusive element to kick them into the next gear. "The Triumph Of King Freak (A Crypt Of Preservation And Superstition)" sets the stage well and makes you optimistic that the album will build on this onto even better things. By the time "Shadow Of The Cemetery Man" finishes, doubts and questions will start to linger, growing louder as the album goes on.

While no one seemingly puts a foot wrong, with Rob Zombie sounding as if he has defied age with his voice holding as strong as it did back in his White Zombie days, no one in the band particularly put their strongest foot forward either. John 5's guitar lines lack much in terms of personality and like the rest of the band, they appear to clock in and clock out with precision without any lasting impressions.

As if to compensate for not living up to its early promise, the album swerves somewhat with "18th Century Cannibals, Excitable Morlocks And A One-Way Ticket On The Ghost Train" offering up an old western style track that is a refreshing break from the conveyer belt of ok tracks, proving the old adage that a change is as good as a break. Coupled with the two following tracks ("The Much Talked Of Metamorphosis" not included as it is an interlude), "The Eternal Struggles Of The Howling Man" and "The Satanic Rites Of Blacula", and you have a run of songs that come close to being great and serve as a high point that doesn't gain much in altitude.

When you consider these mixed batch of ok songs are the best on offer, then the scale of the problem starts to take shape. "Shake Your Ass-Smoke Your Grass" and "Boom-Boom-Boom" are perhaps the most self-evident examples that Rob Zombie had given up on the album himself by this point, sounding like half-hearted rehearsal pieces that found their way onto the album proper. Given the brief restoration of hope that had preceded these songs, it is a hard crash landing back to the reality that you are listening to the worst release in an artist's discography. While previous releases by Rob Zombie always had a "Never Gonna Stop (The Red Red Kroovy)" or "Sick Bubblegum" to compensate for the middling tracks that came along for the ride on their respective albums, The Lunar Injection Kool Aid Eclipse Conspiracy doesn't have this counterweight to its own so-so tracks, such as "Get Loose" and "Shadow Of The Cemetery Man", which results in you asking yourself why you continue to listen to this album.

The Lunar Injection Kool Aid Eclipse Conspiracy is Rob Zombie by numbers, a batch of songs that form the shell of a track but lack any filling of substance to make listening to them rewarding. Hopefully any follow-up to this album is able to rectify these shortcomings and learn from its mistakes to ensure that it is a mere misfire rather than the start of a decline.

Written on 15.03.2021 by
omne metallum
Just because I don't care doesn't mean I'm not listening.
More reviews by omne metallum ››