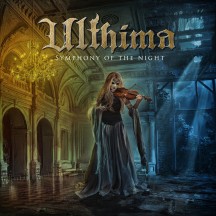 
Ulthima was born in Mexico but relocated to Finland because that's where melodeath comes from when it isn't Swedish. After a full decade (plus taxes) of unattested existence, Ulthima has become one of this year's wave-makers in melodic death metal, catapulting from obscurity to acclaim on the strength of its debut album, Symphony Of The Night, an album of enthusiastically crafted northern comfort.

The cover art suggests something gothic or symphonic (I mean, she's holding a violin, for Pete's sake, and just look at that tiara), but in the time it would take to wake a sleeping goth and warm up their crooning pipes, Ulthima is already speeding into the distance on a robust set of wheels cribbed from Children Of Bodom, Norther, and Kalmah. They show little concern for whether their audience can detect the origins of their style, and you'll have names like Ensiferum, Omnium Gatherum, and Æther Realm scrolling past your eyes like the end credits as you listen; Symphony Of The Night is a new thing that sounds like an old thing, and as some wise Metal Stormer once observed, people love new things that sound like old things. It's up to the strength of Ulthima's spirit and compositions to set it aside from the expectations you have already formulated from reading these names and noticing that it's a relatively popular album belonging to a favorite genre of this website.

Guitars and synthesizers share responsibility for the lead melodies; they often go their separate ways, with the guitars become deep and resonant for a chorus or chugging up a good breakdown and the synths dancing on the edge for some sophisticated ornamentation, but they usually work in tandem to produce a complex frontal assault. Those leads sometimes burst free of mere melodic affectation and soar for heroic heights, as on the heavily Ensiferum-influenced "Eternity"; there remains nonetheless a touch of gloom as well, a frigidity to certain keyboard parts that reflects mood as much as geographic location and a despair lurking in the guitars between ripping speed runs. The production is nicely balanced, light enough to allow the melodies to breathe but also powerful enough to keep that "death" in melodeath; while the instrumentation wears a bit thin at times, sudden explosions of choruses will turn that right around. The album mostly holds to a stormy pace that allows the songs free reign to stretch their battlefield muscles, under the command of the standard hoarse, mid-range harsh vocals that hang in that perfect extreme power range between deep death growls and black metal shrieks.

Symphony Of The Night is a competent rendition of the familiar melodic death/extreme power metal sound, so anyone who likes their metal cooked medium Finn and served on a Finland bun with extra Finland sauce [vodka?] will enjoy whiling away the moonlight hours with this album. For my part, after several complete sessions, I still can't escape the sensation that I'm listening to a band consciously trying to play melodeath the way they expect I expect it to be played. "Eternity" sounds like a lost Ensiferum song, "Dancing With Shadows" is all Wintersun, and I'm even hearing Amon Amarth in the heaviest phases. Not that I don't enjoy this style when enacted by all the bands whose names I love to drop when given the opportunity, and Ulthima's production and performances are much to be admired in a band only just releasing its first album, but so far Symphony Of The Night simply hits the surface and rolls off. No songs yet stand out, nor do I hear anything that I could immediately recognize as belonging to Ulthima. Not everyone demands more than an album that is competent and listenable, which this surely is, but I suspect that I myself will wait for something more exciting to result from Ulthima's long-awaited birth on the next album.