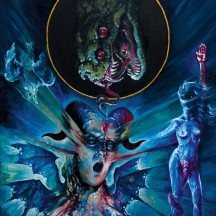 
Some people in this world are so talented that it's unfair to the rest of us.

One-man black metal project Esoctrilihum has been so prolific in the last five years that it now releases its sixth full-length in this short amount of time. Despite appreciating The Telluric Ashes Of The Ö Vrth Immemorial Gods and what came before it, I have to say that I jumped with both feet on French musician Asthâghul's bandwagon only last year with Eternity Of Shaog which earned my vote for best black metal album of 2020. Exactly one year later, Esoctrilihum is back with another full-length and I admit I was a little bit cautious as to how one person can follow up such a huge record so soon after its release.

But after just one listen, all my reservations flew out the window. Dy'th Requiem For The Serpent Telepath picks up from where its predecessor left off, concentrating on the dark, symphonic, and mystical allure of the compositions. The use of kantele, violin, piano, and synths expertly blended with haunting guitars and delirious melodies is exquisite once again. Similarities aside, this album has a colder feel compared to Eternity Of Shaog, in the sense that it gives more room to the synths; it is more nightmarish than oneiric, if you will. This approach is reflected in the cover art too; while Eternity Of Shaog was crafted with emphasis on earthly colours, Dy'th Requiem For The Serpent Telepath is dominated by different shades of blue. Needless to say that it is a strong contender for best cover art of the year.

The album consists of four sections and twelve tracks, and according to the press release, it tells "the story of the death, transfiguration and rebirth of the 'Serpent Telepath' - one of the many entities that populate Esoctrilihum's mental dimensions of horror". Now, it is very clear from his music and his interpretation of it that Asthâghul is as far from your average Joe as possible, but on this album the storytelling is probably his most gripping to date. Obviously inspired by H. P. Lovecraft and Clark Ashton Smith, Asthâghul's lyrics are read as if they were written while the author was possessed by demons / spirits / deities / entities of another world. His versatile vocals, consisting of snarls, shrieks, growls, and hisses, are very much in line with this fictional reality.

Esoctrilihum's music remains dense and occasionally dissonant, and overall it still creates a claustrophobic and discomforting atmosphere. The tight production also adds to that experience. But in the last couple of albums it is clear that the abundance of ideas is more coherently presented, there is a certain flow and direction despite the mood changes. I don't expect the madness and the chaos to ever stop being part of Asthâghul's creations, but it seems that he has found a way to hit the sweet spot that lies between free association and consistency. The embrace of melody is very important because it provides certain points of reference that are much needed when the album's runtime almost reaches the 80-minute mark. Still, if there is something that Eternity Of Shaog was better at over its successor, it is the editing value.

Dy'th Requiem For The Serpent Telepath is a long and challenging listen, but there aren't many bands out there capable of crafting such a maelstrom of mind-bending, hallucinatory, and violent black metal. Give it your precious time and undivided attention, read the lyrics while listening, and allow yourself to take this trip into esoteric blackened realms guided by dark spirits.