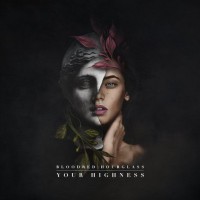 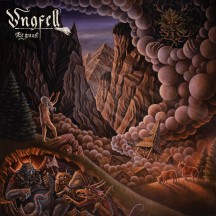 
Trying to pigeon-hole Ungfell as just a "safe" version of Peste Noire is a bit too reductive in expressing just how colorful Es Grauet is.

I'm not gonna talk about Peste Noire or separating art from artist (you do you), but Ungfell joins bands like Sühnopfer or Akitsa in taking that sound as one of their main influences, though not all of them necessarily in the same way or using the same aspects. But also it's really reductive to just say that Ungfell sound like Peste Noire, when you could also name stuff like Abigor or Véhémence. So pretty much name dropping galore. What could this tell us about Ungfell's sound? A lot of hyper-active melodic black metal riffing intertwined with folk sounds. And I don't mean "folk sounds" like just some acoustic guitars and a flute. I mean the album starts with samples of roosters.

This is not quite the same "farmer black metal" that Lugubrum were doing (though they also released a new album this year and you should check it out), there is a overt sense of worldbuilding in the way that Ungfell approach black metal here. It makes sense considering that there is a narrative going along with the record, one set in an idyllic pre-modern Swiss village. So... fairlytale-black-metal? A-cow-mooing-right-before-a-riff-black-metal? Yodeling-black-metal? Certainly something that strikes a balance between being evocative and being comedic. Whether or not they come across as one or the other should really depend upon one's tolerance to having their black metal flip-flopping to folk every other minute. Ok, maybe not that often. I find that it enhances the experience, and I actually wish the non-black metal parts were given even more room to grow, since sometimes it feels like they're there just to contrast, and sometimes they're overly long without really going anywhere.

Es Grauet isn't a fun listen just because of how that black metal is interrupted, but mostly because of the black metal itself. Said hyper-active riffing spews out melodic riffs and then promptly forgets to ever use them again, ensuring a constant stream of ominous melodies, and then combining them with wretched shrieks. But that hyper-activity gets often toned down and moves towards creating atmosphere, in a way that feels even more accessible that their previous two albums, without compromising their pestilential and medieval appeal. It's almost as if one could trace the evolution of their sound through the evolution of the cover art. Hence why it started as a raw medieval looking sketch, and now it's a colorful illustration complete with a world and its characters and its wonders. It's dramatic even at its most vile. Maybe calling it "tongue-in-cheek" would be me reading too much into it, but I "audacious" should work.

I admit I haven't given Swiss black metal its fair due (Darkspace and Paysage d'Hiver need not apply), mostly concentrating on its northern and western neighbors, but the "Helvetic Underground Committee" seemed to have renewed my interest, whether with bands like Death. Void. Terror. or other projects of Ungfell main-man Menetekel, like Kvelgeyst or Lykhaeon (also soon to release a new album). Es Grauet just seems to be the most entertaining of their output so far.

Written on 20.07.2021 by
RaduP
Doesn't matter that much to me if you agree with me, as long as you checked the album out.
More reviews by RaduP ››