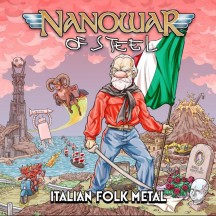 
Mamma mia, this is Italian folk metal (la-la-la-la). As is the case with many parody acts, Nanowar Of Steel's impressive musical talents and versatility often go underappreciated by those who either don't get the joke or dismiss them because of their humorous nature. I, like most of you, do not speak Italian, so this album may be our first chance to experience Nanowar Of Steel on a purely musical level.

Nanowar Of Steel have been as incomprehensible as any band on the metal circuit these last few years. 2018's Stairway To Valhalla finally converted me into a fan, tempering 15 years of scattershot vulgarity and Jackson Pollock-style Manowar references into a collection of clever skits and makeshift anthems both consistently amusing and legitimately listenable. They followed up that album with two of the best singles of the decade, "Norwegian Reggaeton" and "Valhallelujah", whose ground-breaking musical ambitions you may grasp from the titles. Then there was this, and that's *very* different, and then there was this one, too, and I enjoy them but I don't speak Italian (just to remind you), so I haven't the faintest idea of what is going on either in the songs or in the comments sections. And wouldn't you know it, their latest studio album has absolutely nothing to do with any of those things.

The packaging speaks truth: this is a bona fide Italian folk metal album, and an uncommonly dedicated one at that ("We take parody very seriously," after all). According to the press kit, each song incorporates a different style of Italian folk music and is stuffed with folklore, not to mention guest appearances from prominent Italian metal musicians, and of course all the lyrics are in Italian (with the exception of German and Spanish versions of "La Maledizione di Capitan Findus" tacked onto the end). There are folk metal bands from Italy, but I'm not sure to what extent specifically Italian folk metal has any precedent - "folk metal" in Southern and Central Europe usually connotes a generic pan-Celtic sound - so if Folkstone, Furor Gallico, Elvenking, or their kindred have any claim to origination, it's news to me (a consequence of being generally unfamiliar with traditional Italian music).

Nanowar Of Steel already fused metal with reggaeton and gospel in this review, so they don't necessarily need credit for inventing another thing. By now, you may be possessed by a more important question (Italian-speakers, look away for a moment): how are you, a non-Italian-speaker, to appreciate an album full of jokes if you can't even understand them? Well, one answer is that, much like with Weird Al Yankovic, the patron saint of parody, I've found that the best Nanowar Of Steel experience comes from watching their music videos, which explain the crude nonsense and come with subtitles. But not every song is going to come with a video, and if you want to throw on an album in the car or on a jog or while removing a sword from a stone, you're (hopefully) not staring at a screen. That's where Nanowar Of Steel's underrated chops come into play.

Even without intelligible lyrics, the music speaks for itself, for Nanowar Of Steel always built their mirthmaking on skillful send-ups; one of my favorite things about this album is how "La Maledizione di Capitan Findus" still sounds like they're making fun of Rhapsody even though it primarily sounds like they're making fun of Alestorm, and it's a heck of an exciting aquatic anthem with or without captioning. "Gabonzo Robot" is more of a tribute to haphazardly dubbed anime shown on Italian TV decades ago than it is a reconstitution of actual Italian folk music, but it perfectly captures that "beginning-of-anime hero intro" sound - and before you go complaining that you're getting shorted on your authentic throwbacks, just try and dance along to "La Mazurka del Vecchio che Guarda i Cantieri" or "Scugnizzi of the Land of Fires." The sharp focus of Stairway To Valhalla carries over to Italian Folk Metal; the musicianship is impeccable, the production is springy and brawny, and the versatile vocals of Potowotominimak and Mr. Baffo facilitate the numerous contrasts in texture throughout the album. Some tracks sound reasonably close to your typical power/folk metal anthem-style compositions ("La Polenta Taragnarock" and the aforementioned "La Maledizione di Capitan Findus" should be able to hook you unawares, while "L'Assedio di Porto Cervo" will ensnare those in search of something darker and heavier), but other tracks offer me no easy point of comparison, being so thoroughly infused with a traditional Italian flavor that I've never heard elsewhere in this exact combination.

I may have no idea what's going on most of the time, but Italian Folk Metal is still likely to find itself somewhere on my 2021 list when this is all said and done. A catchy and ripping folk metal anthem will always transcend language barriers, and in between those blood-pumping Rhapsody rewrites, there are plenty of curious tunes that reveal the potential of yet one more genre fusion to fall in servitude before Nanowar Of Steel. I do hope that we'll get a full album of Norwegian reggaeton some day, but it really feels like Nanowar Of Steel has just begun to uncover its true power - both as a joke band and as a pusher of real boundaries.