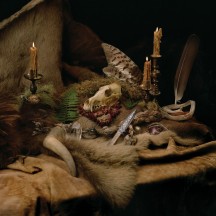 
Back in my day, Wolves In The Throne Room only needed four tracks to be impressive!

In all fairness, back when WITTR first deviated from the 4-songs formula with 2011's Celestial Lineage, it was mostly to separate the interludes into their own tracks. And Celestial Lineage was the last absolutely fantastic WITTR album, so even without the same tracklist formula, they've shown that they can be great. WITTR's trajectory since deviating has been a bit interesting. First branching out with an ambient / progressive electronic detour with 2014's Celestite, and then returning to the atmospheric black metal sound with something that was a bit more polished and somewhat straight-forward with Thrice Woven, to mixed results. So even if their 2010s material wasn't really on the level of their 2000s material, you still could at least have one guarantee: long songs. And upon meeting the tracklist for their newest record, Primordial Arcana, there was one thing that I noticed that made my heart skip a beat: only one of the songs was over 10 minutes, and only by less than a minute.

So one of atmospheric black metal's most beloved epic-writers is pivoting to even more straight-forward material? That was my initial thought upon hearing the advance singles too, and that hasn't changed much upon listening to the entire thing. So calibrate your expectations, folks! Primordial Arcana is Wolves In The Throne Room re-inventing themselves. For better or worse, because it's still recognizably the same band that released all those masterpieces and it's hard not to compare the two, but compared to Thrice Woven, which was still pretty much in that style, albeit with some signifiers of the coming direction, Primordial Arcana takes a bigger leap into melodic black metal and a bigger emphasis on riffs and rhythms rather than atmosphere. Now don't get me wrong, this is still first and foremost an atmospheric black metal album, and while you can tell it's the same band, this is the further they ever went from home without completely abandoning black metal like they did on Celestite.

So, it's no Two Hunters stylistically, that much is settled. It's still atmospheric, but there's a bit of a different vibe that is being presented. You can still stick different signifiers like "epic", "dark", "pastoral", "naturalistic" and whatever to it, just like you did to their previous albums, but this one feels less "celestial", which is rich coming from a band where half of the album's titles have to do with the astral plane. This one feels more down to earth, even if it's still as far away from what we could call "civilization". I mean "primordial" is in the title, so you can expect it to be a bit more pagan and ancient, and that is clearly reflected in how the album feels. There was never a Wolves In The Throne Room album that didn't feel like it was connected to the Cascadian landscapes, but this is the closest it felt like it is alive and it could bite you. Far from the most rabid black metal out there, even by atmospheric black metal standards, but for Wolves In The Throne Room to sound this direct, it's quite something.

It does have some similarities with Thrice Woven in its directness, but compared to the more muddy production of that one, Primordial Arcana somehow manages to sink the album back into an ethereal dreamlike feel akin to their previous work, something that I felt was missing on Thrice Woven. Though Kody Keyworth has been a live guitarist for the band since 2010 and has formally joined in 2017 and performed on Thrice Woven, this is the first album that he's joined the Weaver brothers as a songwriter. Which might explain why the songwriting here is tighter than on the previous record, even if it doesn't live up to the classics, it still shows just how exciting it can still be to have a new Wolves In The Throne Room album to join you on your nature walks.