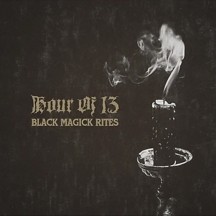 
This is a record that was digitally released on November 1st, 2020, for just 24 hours. For those of you that missed it, Black Magick Rites is out on August 27th via Shadow Kingdom Records, the label that released the band's self-titled debut album back in 2007.

Hour Of 13's cult-minded traditional doom has been resonating with metal fans of the style around the world since the band's inception. Being one of their fans myself, I was filled with anticipation for the follow-up to 333 which had come out in the distant 2012. Eight or nine years of wait is a long time to be deprived of this primitive, occult, old British metal-loving (Black Sabbath, Pagan Altar, Witchfinder General, etc.), deathrock-touching, doom fix.

Hour Of 13 is basically the brainchild of multi-instrumentalist Chad Davis. On this album he handles not only all instruments, but also all vocals for the first time. Phil Swanson, who was the vocalist on the three previous albums, is the person sorely missing from Black Magick Rites because Chad Davis isn't a competent singer. Swanson's voice added a certain distinct element and was very alchemical to the sound of Hour Of 13. In the past, he was in and out of the band all the time but he was always there for the album recordings. Now he is not and it shows. Chad Davis's vocals sound very soulless, monotonous, and outright annoying to my ears. Neither the reverb nor the double-tracking improve anything (quite the opposite) or change the fact that he should not be singing.

I find it very difficult to judge the music under these conditions but it feels to me that this is the least inspired Hour Of 13 album up till now. The opening track is the best on offer; it has nice doom riffs right from the get-go, accompanied by a short '70s type of solo, and another cool little solo is used for the outro. Everything that follows is more or less inferior. The album flows in a trudging pace which is expected for doom metal but this is not the doom metal that Hour Of 13 is known for. Upbeat tempos are missing, the riffs do not stand out the way they used to and most of the album goes by with little variation. "Harvest Night" tries to spice things up a bit and it kind of succeeds. But I cannot shake off the feeling that this album could and should have been far better.

The songs feel like they play longer than they have the right to. For example, "House Of Death"'s 7-minute duration is not justified by what is going on while the song unfolds. The riff from 3'15'' to 4'00'' creates anticipation for something grand that just does not come. During its last 40 seconds we hear Davis irritatingly repeating the lyrics "Come, come, come into this house of death". Similarly the 8-minute closer plods under the weight of the same riff for the first 3 minutes or so and then there is this Killing Joke-ish bridge that goes on for over a minute and a half, which culminates into a cool riff that is ruined by the poor vocals. What is worse is - again - that for the last minute of the song Davis repeats the phrase "Into the night" only to thoroughly convince me that I don't want to listen to his voice ever again.

This review probably comes across as very negative - and it is - but bear in mind that underwhelming Hour Of 13 is still somehow solid and serviceable doom. However, this band has been so much more than just 'solid' and 'serviceable' in the past. I cannot exactly say how this would be digested with Phil on vocals but I know that it would have been far more listenable for sure. The music is not stellar by any means, but with a proper vocalist Black Magick Rites would have been less disappointing.