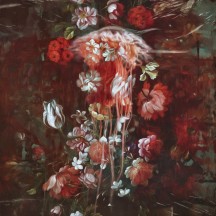 
Funny how you can pick an album expecting it to be depressive black metal, and it turns out to be symphonic love-themed post-rock. The one-man band and the dead man's hand, and whatnot.

I keep running across one-man bands for some reason. Synchronicity, maybe? It bears repeating: there's a big pro and a big con with doing it all by yourself, and the pro and the con are two sides of the same coin. On the one hand, all those brilliant ideas pestering you at night, demanding attention, release, and realisation, are yours and yours only to do with as you please. On the other hand, there is no one but you around to diversify your influences, give a second opinion, or handcuff your rampant creativity when it risks to either become a throw-in-all-but-the-kitchen-sink orgy of concepts or unwittingly start to, despite how it sounded in your head, come off as a one-trick pony. Usually, the result is a mix of these two extremes, and it is in the delicate blending of these two poles the listener's opinions will fall somewhere between "man, I totally get you" and "how does this brain even work?"

Obviously, that opening paragraph sets the stage for a treatise in cognitive dissonance, but it is not always so easy. I "totally got" what Ophiuchi was doing on Shibboleth, and I still love the living hell out of it, but I also "totally got" what Wreche was doing on All My Dreams Came True, while seeing more potential than excellence, and though I still have no clue what Victory Over The Sun was doing on Nowherer, it sounds amazing all the same. On Unreqvited's Beautiful Ghosts, I sort of get it, sort of don't, mostly like it, kind of don't.

With that out of the way, I'd do sole member 鬼 a grave injustice should I not mention both his songwriting chops and multi-instrumental technicality. There's a lot going on all the time on this album, but never in an overbearing way. Deceivingly titled opener "All Is Lost" is an upbeat, orchestral post-rock jam driven by highly competent and intricate drum work, which is just how I like it. A few seconds into my first listen, I was reminded of Love Of Cartography by sleepmakeswaves, in the unique use of lead keyboards on top of what could be summed up as Mogwai late for the bus. Several listens later, it has the same effect on me, in that it is fundamentally post-rock, yet with a high-octane percussive drive and synthy playfulness that begs for repeated listens.

The two following tracks showcase a wide variety of influences, with the longer cut "Autumn & Everley" and its dependence on neoclassical piano melodies supported by, I repeat, highly competent and intricate drum work, at times erupting into blast beats carried by muffled shrieks. "Reverie" keeps the curveballs coming, consisting of over five minutes of static noise and buzzing ambience. Very good static noise and buzzing ambience, at that. Sadly, on every one of my returns to Beautiful Ghosts, I've found it hard to maintain interest after these admittedly intriguing three songs. The centrepiece "Funeral Pyre" sounds much like the second track, and there is not much following it that is not already presented better on the album's first half.

I've a saying that usually puzzles people: "it's great when it's good". I think the meaning should be evident, and this album falls somewhere too much in between the polar extremes of the one-man band challenge by opening with a salvo of wildly varied approaches, only to quickly fall into a sort of "been there, done that" rut. But, hey, it's great when it's good, no doubt.