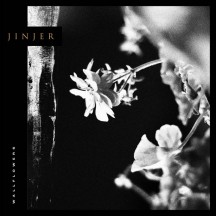 
Sometimes you just have to give up and say 'this isn't for me'.

Although I've really gotten into the djent/prog-metalcore scene in the past few years, not every name has clicked for me; I only truly jive with certain songs by TesseracT, and I rarely feel an inclination to revisit Animals As Leaders. However, Jinjer is probably the most egregious example; after the live session of "Pisces" exploded so much (over 50 millions views in 4 years is frankly insane when compared with similar bands), they established themselves as a real upcoming force within the scene. Sadly, I've never understood the hype over the "Pisces" video, and my most recent encounter with them was 2019's Micro EP, which I found actively irritating at times. Still, new year, new album, and I'd be doing myself a disservice to not even try to enjoy Wallflowers.

If nothing else, Jinjer have a musical approach that really does distinguish themselves from other bands within the prog-metalcore scene. On the one end of the spectrum, they push the intensity with their heaviness; from the ballistic riff that kicks off album opener "Call Me A Symbol" to the blast beats that turn up in "Mediator", there's a level of aggression and extremity in Wallflowers that goes far beyond anything that the likes of Periphery and Monuments typically approach. There's even times when I start thinking of prog death/tech-death bands, given the complex, technical nature of some of the instrumentation and the intensity it is delivered with.

One the other end of the spectrum, some of the choruses and clean vocal sections of Tatiana Shmailyuk seem to be influenced by 90s/00s alternative rock/pop; it may be a lazy comparison due to a lack of better reference points, but I did have the likes of Gwen Stefani come to mind at times whilst listening to Wallflowers. Dabbling with poppier sounds is by no means a novelty for the style, with Periphery increasingly including songs more geared in a pop-influenced direction, whilst Chris Barreto paid tribute to Michael Jackson with some of his work in Monuments. However, the specific approach Shmailyuk and Jinjer take in gearing the band in more of an alt-metal direction is fairly unique.

So, the foundations of Jinjer, with a sound that leans at different times towards progressive death and alt metal within a djent-y framework, sets them apart from their peers. However, how does that translate into enjoyment of their music? Wallflowers starts off well enough; "Call Me A Symbol" is a fairly blistering first song, at different times abrasive, groovy and eerie. There's other moments during the record that I enjoy; there's some quite neat softer sections in "Sleep Of The Righteous" and "Wallflower", particularly the latter with its subdued but sinister opening few minutes, whilst "Colossus" is another track that manages to be quite savage. However, after having given Wallflowers several spins, I do have to say that it's done more to reinforce my previous opinions of Jinjer than it has to make a convert out of me.

I would split my issues with Wallflowers into two categories: parts that did not entertain me, and parts that actively irritated me. In terms of things that did not entertain me on Wallflowers, for all its snarl, I found it lacking in particularly memorable riffs or grooves. I wonder whether the increased focus on extremity might have contributed to this, but after several spins, there's very few instrumental sections that stick out to me, and no moments that would excite me when I encountered them again on a replay. Considering I find memorable instrumental work and grooves to be strengths of bands I enjoy within this scene, the lack thereof here is a turn-off. Also, whilst the style of the cleaner vocal sections that Jinjer uses is distinctive, there weren't many vocal hooks that I actually enjoyed, or that had me wanting more. Even the album's lead single "Vortex", which starts off promisingly with a softer but quite ominous verse, has a chorus that is presumably intended to be quite gripping, but goes in directions that do nothing for me, which is something that used to really put me off bands that fell under the djent umbrella.

All of the above already leaves me feeling somewhat indifferent about Wallflowers; however, there's a couple of tracks that go from middling to actively negative for me. First, "Disclosure!", a song that really goes closer to a more mainstream alt-metal sound, mixes a grating chorus with a very bland verse/pre-chorus. Not long after "Disclosure!" on the tracklist comes "Pearls And Swine", the longest song on Wallflowers, and another one that is dragged down by an annoying vocal line; the teacher-based lyrics in the chorus drag me back to the "Teacher, Teacher!" song that put me off Micro so strongly. Combine this chorus with a song that drags on for too long, and it's an uphill battle trying to win me back once "Pearls And Swine" is finished.

I found reviewing this album tricky, because I recognize a lot of my issues with it are due to personal taste, and I can recognize the relative originality and musicianship of the people involved; however, I can't deny the fact that I've not enjoyed spinning this album, particularly when I've been listening to this promo at the same time as the one for Aphelion by Leprous, another album I feared I would dislike but actually really enjoyed. If you're an existing fan of the band, or someone with a strong taste for more mainstream alternative hard rock/metal, you probably will get a lot more out of this than I did, but I can't imagine anyone as previously unconvinced by the band as myself will be won over by Wallflowers.

Written on 27.08.2021 by
musclassia
Hey chief let's talk why not
More reviews by musclassia ››