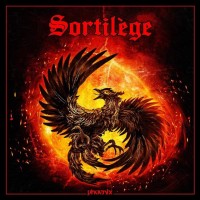 
Sortilège! Crafters of S-tier heavy metal in the '80s, they went down because of the lack of interest shown by the ignorant French producers. Are they dead for real?

No! Because the Phoenix rises from ashes as the saying goes. This album is marking their come-back. It consists of a remake of old songs, with modern production and new musicians (all original members but the singer have mysteriously disappeared; I don't have the full picture yet). It also features two brand new songs.

The first concern would be: does the production hinder the music? Sortilège have three classic albums with a really dirty sound, so the purist would obviously ask for a recreation of such style. But no, the mix is modern (or "generic" as I would coin), and I think everyone agrees upon saying that it doesn't quite capture the grand atmosphere of the original. That said, it's still good, some people like this type of stuff, and defend that the music deserved to have this sound in the first place.

Another great concern looming is the vocal performance. Christian Augustin, aka "Zouille", does have a very unique voice, quite powerful and lyrical, able to flirt with the highs. And a delightful timbre. However, he's grown old, of course, 40 years have passed. First I was afraid he would not make it. The tuning went down a half step, some of the higher notes have been removed from the new interpretations, and he lost some expressiveness. Yet, not unlike Rob Halford, his voice got nastier and has more grit. Hearing his raspy screams was instantly engaging, and the high shrieks were a pleasant surprise too.

The new musicians - (some of them not really new to the game, since they come from other French '80s bands Satan Jokers and Manigance) - are doing a great job, on guitar especially. The leads are respectfully reproduced as far as I can tell, and you can hear most of the stuff better. But just to quench my thirst for criticism, I'd say that the reinterpretation misses the point of some songs. Songs are played a bit slower overall. For my great sadness, most rhythmic intricacies have been simplified. "D'ailleurs" and "Mourir Pour Une Princess" previously had an odd meter, giving some extra groove when you hear the drums inverting pulse and counter-pulse, but not anymore. I wish "Gladiateur" would have a marching music feel too. The basslines also disappeared, banished to the sub frequencies.

While listening to the album my enthusiasm dropped little by little, because of something I haven't even minded in the first place: the setlist. It's all songs I don't really like. And the ones I like are not there either. "Amazone", "Légende", "La Montagne Qui Saigne"... or why not obscure songs from the first demos, like "Galère Des Tenèbres", if you allow me some fantasy. I don't know who picked these songs. Maybe they were the easiest to learn, or Zouille's favorites...

This leads me to the new songs. Compositionally, they are ok. The lyrics though... Sortilège are especially interesting to French listeners since they always put great care in choosing their vocabulary and create a story within the song. It usually sounds very well, and I can't say the same about every band. But it just doesn't work on "Phoenix". It is disappointingly idiotic and subpar lyrics-wise. "Toujours Plus Haut" is better. My problem with it is the poppy flavour of the chorus (also it reminds me of the leitmotiv from "Fort Boyard").

Conclusions: If you want to listen to a good heavy metal release, you can pick up Phoenix. I've been mostly negative in my review, but that's only because of my high expectations. The aggressive voice of Zouille can make this album stand out. But if you don't know the original Sortilège, I can only advise you to check them asap. In other news, I have recently discovered a new French band, called Furies. They have a lot of potential, and I've seen them on stage with Zouille. So I wonder if they could learn from one another, or even merge the bands. For making new songs at least, so we would have Sortilège's oldish lyrics + newish voice, and Furies' energy and riff/leads-skills. I can dream...
Written by Ansercanagicus | 30.08.2021