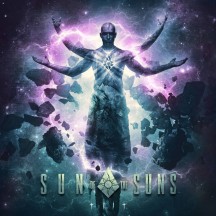 
I have questions about the band name, but not the quality of their debut record.

If the Sun is the star at the center of our solar system that planets orbit, what are the other Suns, and what would they do in relation to a Sun Of The Suns? I'm sure there's a logical explanation from the band about the band name, as well as what TIIT stands for (Wikipedia only describes Tiit as an Estonian first name), but I struggled to find much information about the band online at all, so any astronomers in the comments section, feel free to chip in. In the absence of this knowledge, all I can do is focus on the music found on TIIT, the most important part of the package, and thankfully it delivers to such a standard as to render questions about the names irrelevant.

If I were to categorize the debut record from these Italians, I would use the tag tech-deathcore. Although my most recent deathcore infatuations have been of a more symphonic brand (Shadow Of Intent and Lorna Shore in particular), some of my first positive interactions with the genre around a decade ago were with bands of a more technical or progressive variety, such as Fallujah's The Harvest Wombs and A Higher Place/The Discovery by Born Of Osiris, and I felt that Xenobiotic's Mordrake got not nearly enough love last year, so I've clearly got a taste for this style. Still, amidst a sea of albums in the sub-genre that find their way into weekly release day round-ups on websites that I trawl for quality new music, there's something about TIIT that really made it stand out against its peers.

I feel like perhaps the thing that works in TIIT's favor is that, while I would (and did) describe Sun Of The Suns as a tech-deathcore band, they don't sound too rooted in either tech-death or deathcore; instead, whilst there's obvious elements from both to be found in the songs on this record, it feels like some of the best ideas from each genre were taken whilst the more divisive excesses were left behind. Yes, there's some thick deathcore grooves and a hefty breakdown in "I, The Demiurge Pt. 2", but an example of the former at the beginning of the song is elevated by some nice atmospheric leads above, and the latter is relatively restrained for deathcore. And yes, there's some contorted riffs and frenetic leads later on in the same song that belong more to tech-death, but the band rarely sacrifice groove or power in favor of pure technicality.

There's also some nice atmospheric inclinations and melodic highlights across the record; without moving on from "I, The Demiurge Pt. 2", there's a wonderfully ear-catching solo section towards the end of the track that lights the song up before Sun Of The Suns go back to breakdown territory. On later songs, you can hear solos on the likes of "The Golden Cage" and "TIIT" that toe the line between tasteful and pyrotechnicality. Less technically oriented and more atmospheric is the minimalist lead opening and repeated during the title track, its simplicity countered by the percussive power laid beneath it. I think perhaps the most dominant feature of TIIT is how groovy it can be, spilling into djent territory at times on songs such as "The Golden Cage"; the band really know how to throw out some irresistibly headbangable riffs.

All these elements, whether intense, complex, groovy or melodic, come together very nicely throughout this record, meaning that Sun Of The Suns make a very strong first impression. Considering how new they are, the album has an impressively professional-sounding production, with a high degree of clarity to the music without it being too over-polished, at least to my ears. TIIT is powerful, it's memorable, and it thoroughly enjoyable.

Written on 01.09.2021 by
musclassia
Hey chief let's talk why not
More reviews by musclassia ››