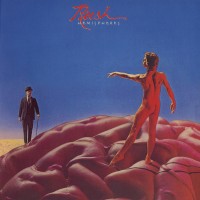 
While many would consider Moving Pictures to be the pinnacle album by Rush, I would have to say Hemispheres had more of an impact on me, and from what I understand the metal world too. It's certainly clear that Hemispheres had an influence on bands such as Dream Theater and Tool; it is also said that Iron Maiden and Alice In Chains were also influenced by Rush, and in particular this album.

Hemispheres showed the musical abitlies of the three great musicians a lot more than any previous albums, and for me no album after lived up to this is in terms of complexity, and progressiveness, and it contained some of the best use of synthesisers I've heard. It may only have four songs, but they are structured perfectly well. The musicians make use of every instrument they could play to the best of their abilities. The legendary drummer Neil Peart had written all the lyrics himself, while the music was composed by bass player, and vocalist, Geddy Lee, who also led on the synthesisers. Alex Lifeson played both six-string and twelve-string electric guitars, as well as acoustic guitars, and he displays guitar work in many different styles.

With Rush being hugely influenced by Led Zeppelin, they chose to record A Farewell To Kings in Wales, the same place Led Zeppelin had recorded several of their albums; Geddy Lee stated that the band had enjoyed the experience of recording in Wales so much, they decided to continue recording their next album Hemispheres there. Despite there being only four songs on the album, the recording took longer to record than any other album Rush did, and was described by Neil Peart as exhausting, with very little time off.

Hemispheres starts off with the mind blowing epic tale, and one of my favourite Rush songs, "Cygnus X-1 Book II: Hemispheres", which, at over eighteen minutes long, occupied the whole first side of the album, and was the sequel to the song "Cygnus X-1 Book I: The Voyage" from the previous album, A Farewell To Kings. "Book I" tells the story of a spaceship called Rocinante that journeys to outer space, then entering a black hole, whereas "Book II" was a tale of mythology about a conflict between Apollo and Dionysus, in which Cygnus then intervenes and resolves, claiming a balance of heart and mind that is needed for humans to live well.

The two shorter songs, "Circumstances" and "The Trees", were released as singles; for me, "Circumstances" is the weakest song on the album, although it's certainly not a bad song by any means. "The Trees", on the other hand, is one of the most cleverly written songs in the Rush discogrophy; without me going into detail of what the song is about, the song title will give you a huge clue.

The album then finishes off with "La Villa Strangiato", which is arguably the greatest instrumental song ever! The song is nine minutes long and split into 12 distinct sections, and, according to Lifeson, it's based on various nightmares he had particularly while on tour. The song shows such an extreme level of musicianship, and the song itself took longer to record than the whole Fly By Night album.

Hemispheres is a true progressive masterpiece, and while it is not Pink Floyd standards when it comes to progressive rock, it is certainly a masterpiece when it comes to blending prog with hard rock. And for those who want to get into Rush and prefer a more easy listening option, I would recommend Moving Pictures to start with.