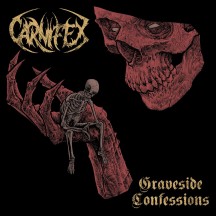 
I got another confession to make…

As the tidal wave of deathcore has receded after crashing on shore and flooding the metal scene in the late '00's and early '10's, it is about this time in a genre's existence that the lucky, persistent and the cream of the crop remain; falling into the latter category, Carnifex gain ground with their eighth album Graveside Confessions and show why they have stuck around.

While the band have evolved from their early days as one of deathcore's more infamous acts (something highlighted by the inclusion of three Dead In My Arms re-recordings) to what is a hybrid pseudo-blackened version of deathcore, Carnifex continue to move forward without forgetting their past.

The more prominent use of keyboards is a welcome change of ratios in the band's formula; although they have been used in the past, it was not to the same extent as songs such as "Talk To The Dead" and "Seven Souls", which helps Graveside Confessions sound like the band are starting to consistently nail the somewhat blackened elements of their last few releases within their more matured deathcore sound. With "Countess Of Perpetual Torment" having a groove that is as crushing as it is catchy, you have what is one the band's strongest works to date, alongside a host of other tracks that will likely take prominent slots on both setlists and playlists in years to come in the form of the title track, "Talk To The Dead" and "Cold Dead Summer". Arford has really stepped up on this release, with his balancing of riffs with breakdown-chugging to be on point, with the likes of "Carry Us Away" benefitting greatly from this.

What may have caught the eye of many is the inclusion of the cover of Korn deep cut "Dead Bodies Everywhere" and the addition of three Dead In My Arms re-recordings (or "Graveside Editions", as they are called here). While no doubt incentivising some to give this record a try, they don't really add much of substance beyond that; I mean, it's nice to hear "My Heart In Atrophy" without the high-pitched snare drum, but beyond giving the tracks a polished production (which, depending on whether you prefer a raw sound to these types of tracks, is a good or bad thing), little is gained apart from a longer running time and a chance to hear a hit brought back for little reason.

The aforementioned issue of production is perhaps one of the more contentious parts of the album; while smoothing and polishing a song like "Cursed" makes it an ideal wrecking ball to fly off your speakers and knock you off of your feet, it does erase the rough edges that made deathcore what it is today. Clocking in at just over an hour, Graveside Confessions is the group's longest effort to date and is nearly double the usual length of much of the group's prior work. As a result, the album does tend to oversaturate you with content, with the impact of each song diminishing as the album goes on. This is remedied somewhat by the well-placed palette cleanser "January Nights", but not enough to stop you having to take a break from the album during playthroughs.

Graveside Confessions shows that Carnifex aren't a band living off of past glories or infamy for their continued existence, with the band producing a strong milestone for themselves as they move forward in their career and evolution.