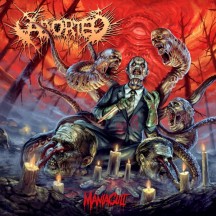 
She's a maniac, maniac on the floor, and she's dancing like she's never danced before.

Eleven albums in and still going strong, Belgian brutality vendors Aborted return with a record that is the audio equivalent of the year 2021: an unrelenting roll of iron fist punches as you try to cling onto what is left of your sanity. If you have yet to discover or hear what the band offer, then jumping in at this point will find yourself with solid ground on which to find your footing with the band.

Ever since 2014's The Necrotic Manifesto, I've found Aborted have struggled to make the same impact as before; though they have neither risen nor fallen since, the two preceding records were solid, but only made faint lasting impressions in comparison. 2021's ManiaCult finally breaks the mould and sears itself into your consciousness with memorable brutality.

ManiaCult features a host of memorable tracks that will endear themselves to fans of the band and of extreme music in general; while the band has attracted a reputation of producing similar and uninteresting albums, ManiaCult diversifies itself moreso than a standard Aborted album. "Dementophobia" is a highlight because of the strong mid-song riff that the song hangs itself off of, while "Ceremonial Ineptitude" has a good rolling effect that sees the band's attack come in waves. Tracks like "Portal To Vacuity" do also try something somewhat different, but work well as album tracks rather than highlights; the same can be said of "Drag Me To Hell", which was released as a teaser before the album's release.

With a well-placed tracklist that spreads out the strong tracks, ManiaCult is an album that can be enjoyed in full without any sense of a lull or loss of momentum, from the strong foot kicking the album off proper in the title track to the closing refrains of "I Prediletti: The Folly Of The Gods" that closes the album in strong fashion.

The album has a production that will neither endear or put off listeners; while it allows all aspects of the band's sound to be well-placed and heard, it does feel somewhat sterile and cold. While the bursts of wall of sound are well positioned throughout the album, it does little to enhance the tracks or make anything sound heavier than it already is. If sonic clarity and power is all you want in an album, then it at least delivers the basics in good fashion.

For people who do not like Aborted I doubt that ManiaCult will offer enough to convince you to change your mind; although it does dabble at the fringes, it doesn't fundamentally change enough to give you an opening into the band's sound. If the album's strongest points of "Dementophobia" or "Ceremonial Ineptitude" don't change your mind then I doubt much else the album has available will either.

Aborted fans will find that ManiaCult is another strong addition to an already solid back catalogue, one that suggests that the band can still challenge themselves in producing some solid material this far into their career (hard to believe they're so close to their 30th anniversary). While this will likely not be an album to win over those who dislike the band, it is a solid effort that provides a good mix of what the band offer for those who are uninitiated (and undented by the barrage of power the band serve up).