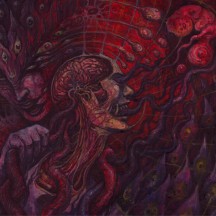 
An extreme metal debut album with 25-minute songs: is this a funeral doom band, or an overelaborate prog band? Neither, it's a death metal band whose songs never fucking end.

It's been a tumultuous journey to release their first full-length for Qrixkuor; going off to tour the US in 2016 with only an EP, Three Devils Dance, under their belt, the British four-piece returned home as a one-piece, with project mastermind S (yes, I know) left to carry on alone. Now on Dark Descent Records, the now-three-piece put 5 years of work on the part of S to record with the help of Esoteric's Greg Chandler as producer, and the result is just as hellish and colossal an undertaking as the music created by Chandler's own project.

There are two songs on Poison Palinopsia, each of which runs for just over 24 minutes. The two tracks are divided into two sub-sections (as indicated by the divided song titles) loosely separated by dark ambient interludes positioned midway through with some Psycho-esque strings on top. Beyond that, it's hard to really refer to specific moments of segments of tracks without providing a tedious list of time-stamps; S has spoken of a desire to not give any 'reset' time with Qrixkuor's music, on record or live, but to submerge and overwhelm listeners into submission. I think it's safe to say that this mission objective has been accomplished on Poison Palinopsia, as aside from the aforementioned brief interludes, there is very little pause across the whole album for nearly 50 minutes.

So what exactly does that chaos sound like? Qrixkuor play, with a somewhat basic description, dissonant death metal with an old-school cavernous production. The tempo for large stretches is pretty relentlessly fast; these songs must be an absolute ordeal to play live. There's extended periods that are comprised of frenetic dissonant buzzsaw riffing, near-constant blasting and vile gurgled growls; however, there's also more than a few moments when it transitions from death to death/doom, briefly slipping into a trudging dirge of vileness. The other element that is fairly consistently present is some quite explosive lead guitar work, which, whilst often giving off the 'crazed evil spirit' vibes of classic death metal solos, can also lean towards something almost melodic from time to time.

None of the components found on Poison Palinopsia are necessarily unique; if you skip to any given minute of it, it will feel familiar if you're somewhat in touch with death metal across the decades. There's two things that make this record stand out in the way that it does. The first is just the way that the elements are arranged into these colossal, neverending extreme metal odysseys, to the extent that the music becomes darkly psychedelic, capturing you in its suffocating spell. Some might argue that the songs push this vibe further than it can necessarily be sustained, to a point of self-indulgence. At times, I'm inclined to agree, but at the same time, I recognize that the extreme length is a factor in the impression that the album makes on listeners.

The second thing that allows the album to stand out, and arguably its greatest strength, is the production job done by Greg Chandler. The cavernous death metal sound is very well established by now, but there's not many records that have pulled it off as well as Poison Palinopsia, and there's not many where it's been as pivotal to the album's success. I would be surprised if these compositions could sustain their appeal for so long if they weren't so strongly enhanced by this hellish production, which really helps feed into the psychedelic nature of the music.

Poison Palinopsia is an ambitious approach to dissonant death metal. The songs aren't really 'progressive' in the typical sense, but the vision of taking the old-school death metal sound, adding in some chaos, and seeing how long it is possible to subject listeners to that kind of torment is a very bold one. Perhaps it would be fair to describe this as atmospheric death metal, in that you're not going to remember specific riffs or solos, but the combination of everything that's occurring creates a seriously potent atmosphere than engulfs listeners. If that sounds like an enticing proposition, add Qrixkuor to your 'to listen' list.

Written on 09.09.2021 by
musclassia
Hey chief let's talk why not
More reviews by musclassia ››