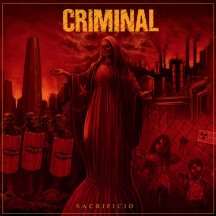 
I wanted to enjoy it more than I did.

Criminal have always been a bit of a hard band to pin down due to their mix of styles, meaning they span the spectrum of death metal through thrash and into groove; they often run the risk of being the jack of all trades and master of none. The one thing that is easy to pinpoint is the consistent quality the band has produced throughout their (criminally…had to be done) overlooked career. Sacrifico is the band’s ninth release and one that keeps the motor turning over in a loud and threatening manner, though one that doesn't make much headway in any direction.

Never ones to shy away from putting the world to rights, the Chilean group have stored a lot of fuel to stoke the flames that power their music in the last few years; indeed, Sacrifico comes out all guns blazing. Taking aim and no prisoners, the band unleash a plethora of scathing attacks in catchy and aggressive form in the likes of “Zona De Sacrifico” and “Zealots” which are as biting lyrically as they are musically. The band manage once again to hit that niche between death/thrash and hardcore that makes them a compelling listen when coupled with the band sharpening their axes. Much of the album will play by and catch your ear, though many of these tracks unfortunately don't go that extra step and catch your full attention.

Sacrifico’s strongest quality has to be in its production, which sounds like it places you in the middle of the room with the group as they play live in front of you. With each component of the band sounding sharp but distinct from each other, you are able to immerse yourself in the music and hear every note with ease. This allows you to appreciate strong cuts like “The Whale” and “Hunter and the Prey”. The cutting jagged edges of Klein and Reisenegger’s guitars to the propulsive drums, courtesy of Estrella, and the heavy grounding of Biggin’s bass all combing as one captivating unit.

It is unfortunate that the band are not able to capitalize on this production with equally great material than the amount found on Sacrificio. While the album has its moments and a good three to four solid tracks, the rest of the album fits in the middling category, enjoyable but not much more than that. Tracks like “Dark Horse” and “Sistema Criminal” will get a rise out of you, but are unlikely to have you coming back to them beyond a full album-playthrough. While they do nothing wrong, it is that they lack doing enough things right that hold them back, which is an all-too-common theme for the album.

Reisenegger does at times stray too close to sounding like Max Cavalera especially on the opening “Live On Your Knees” where you could mistake it for Max being behind the microphone. If someone put “Theocrazy” without telling you who it was, chances are you could easily mistake it for a Soulfly song; which, unless you don’t like said band, isn’t a bad thing but doesn’t help the album produce an identity of its own.

While Sacrifico has its flaws, it is still an enjoyable record and one that will no doubt get your blood flowing as it plays out. Unfortunately, it is one that lacks enough memorable or strong moments that will have you rushing back to hear it again. I see it being added to that ever-growing pile of good but not great albums that accumulate towards the end of a year.

Written on 17.09.2021 by
omne metallum
Just because I don't care doesn't mean I'm not listening.
More reviews by omne metallum ››