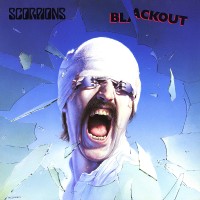 
Blackout is a classic album that for some time has been a hard rock favourite of mine. It's one of the catchiest and heaviest albums in hard rock history, and is also one of the few albums by Scorpions heavy enough to be considered a true heavy metal classic.

It's hard to believe Scorpions formed way back in 1965; they have been through many line-up changes since, including the tenures of legendary guitarist Michael Schenker, Uli Roth and drummer Cozy Powell, but for me this is the line-up that created that signature sound that cemented Scorpions as a real household name in hard rock history, rubbing shoulders with legends such as Led Zeppelin, Deep Purple and Rainbow. Blackout was also one of the first introductions to the 80's heavy metal scene that included the likes of Iron Maiden and Judas Priest.

During the recording of the album, the lead vocalist Klaus Meine had lost his voice so had to undergo surgery; Don Dokken was brought in as a precautionary vocalist while Meine recovered. Several demos were made with Dokken as a lead singer, but the final recordings only had him for backing vocals, and although Meine had to undergo surgery, it certainly had no effect on his performance whatsoever; his vocals during the final recordings were top-notch, in fact, his vocal performance was possibly his best ever.

Matthias Jabs was drafted in to replace Michael Schenker on guitars, but this came at no loss at all, as Jabs and Rudolf Schenker turned out to be the perfect guitaring duo for this album. The riffs and solos between the two were extraordinary, in particular on "China White", where with bass player Francis Buchholz, they really showed their skills. Although the guitar interplay and vocals are the main highlights on this album, you cannot ignore the high level of quality from the bass and drumming, which create an excellent rhythm section, allowing Jabs and Schenker to do their excellent guitarwork. One thing you may notice is that the main riff on "No One Like You" almost sounds identical to the main riff from "Rock You Like A Hurricane" from the following album Love At First Sting, which is one of Scorpions' most well known songs.

I consider Blackout to be the definition of an 'all thriller no filler' album; it contains some of the band's biggest hits, such as "No One Like You", "Dynamite", "Arizona" and the title song "Blackout", as well as the classic instrumental "China White", and with so many great songs on one album, you will hear no shortage of memorable riffs, great guitar solos, and choruses that have great catchy lyrics. It has pretty much everything you would expect from a classic hard rock album.