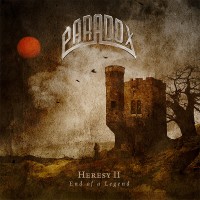 Paradox were unfortunate to have hit their stride too late to make their mark on what was then a genre in decline, with their first two releases flying under the radar but remaining perennial gems for those who dived deeper into thrash metal. Continuing to release solid, though overlooked, releases since their reformation way back in 1998, the band produce yet another strong release since their prime with 2021’s Heresy II - End Of A Legend.

While the ties to the first Heresy record are quite loose, in terms of quality the bond to its forebearer is stronger; while Heresy II - End Of A Legend doesn’t hit the same heights (given it comes 31 years after the band were in their prime, it's an understandable difference), it soars higher than you would otherwise expect.

One link to the original album is the return of Blaha to his position behind the drum kit, having last appeared on record with the band on Heresy; his is a welcome return, given how he throws in fills that are somewhat left-field but no less enjoyable. Paradox are, however, still led by the ever-present Steinhauer, who takes up his dual role as guitarist and vocalist. Paradox run through 13 tracks of upbeat and bombastic thrash that will offer up moments of utter class, ensuring that Heresy II End Of A Legend will be put on repeated listens. Thanks to the guitar tandem of Steinhauer and Münzner, tracks like “The Visitors” are essential listening alongside a host of other cuts like “Journey Into Fear” and “Burying A Treasure”, which immediately jump out of the speakers and into your memory.

Where Blaha steps up and gives the guitars a run for their money in terms of grabbing your attention is where the album hits its stride, with the opening “Escape From The Burning” featuring some of the aforementioned fills and patterns that ensure the rhythm section is more than a wall for the guitars to bounce off of. When there are times that the drums are too high in the mix (such as on “Priestly Vows”, that snare *shakes fist at sky*), it does blunt the overall impact of the track, with passive listening meaning the guitar work and singing go by in a blur.

At 75 minutes long, the album does lull in places and raise the question of whether less could have been more. “A Meeting Of The Minds” is perhaps a prime example of when a band should cut closer to the bone, given its 9-minute duration overstays its welcome (and to top it off, doesn’t so much build to anything than merely continue on). Similar to latter-day Exodus, there are moments throughout this album where songs feel bloated and repetitive for no particular reason other than the sake of it (“A Man Of Sorrow (Prologue)”) and could be shortened without losing anything of real value.

This in turn leads to the album’s other main problem, that being the sheer amount of content in each track. With Steinhauer cramming in a lot of lyrical content on most of the album’s tracks, it does mean that no moment really sticks out on that front; while you can say parts of the album are well sung by him, I could not pick a part out and point to it, given his constant machine-gun approach means it will all pass you by.

If you are wanting an album to be absorbed by and to act as a project to listen to, then Paradox served up a record that will keep you occupied for a long time while not boring you. While casual or quick listens will give you indigestion through the sheer glut of content the band pile on your plate, it serves to be a solid listen for those who stick around and take their time to fully appreciate the bits and pieces that make the whole.

Written on 21.09.2021 by
omne metallum
Just because I don't care doesn't mean I'm not listening.
More reviews by omne metallum ››