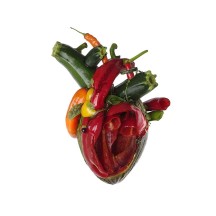 
01. Torn Arteries
02. Dance Of Ixtab (Psychopomp & Circumstance March No. 1 On B)
03. Eleanor Rigor Mortis
04. Under The Scalpel Blade
05. The Devil Rides Out
06. Flesh Ripping Sonic Torment Limited
07. Kelly's Meat Emporium
08. In God We Trust
09. Wake Up And Smell The Carcass / Caveat Emptor
10. The Scythe's Remorseless Swing


The other hotly anticipated album this month.

Carcass have always been a band who do things their own way and at their own pace, from the shift from their grindcore beginnings to melodic death metal, to the band taking their time to not only reunite but produce a reformation record in the form of 2013’s Surgical Steel. It is no small wonder, then, that the band took their time in producing this, the long-awaited and hotly anticipated follow-up Torn Arteries.

Given that the band have already played pivotal roles in two subgenres of metal, Torn Arteries may seem a bit more like playing it safe (though safe by Carcass’ standards is like riding a unicycle on fire down a busy motorway), but it is far from generic or run-of-the-mill. Continuing to play by their own rules, Carcass produce a record that is diverse yet identifiable, from the melodic death numbers to the frenetic tracks that call back to their Necroticism: Descanting The Insalubrious days.

Of course, the question on everyone’s lips: no, not is the album any good, but what is an Ixtab? For those curious, she is the Mayan goddess of suicide (oh, and yes, the album is also really good as well). Touching upon every corner of their history, Torn Arteries should offer something for everyone; those who enjoy the rough and uptempo material will get their thrills from the title track and “Kelly’s Meat Emporium”, while latter-day fans will get their fill from the likes of “Eleanor Rigor Mortis” and the closing “The Scythe’s Remorseless Swing”.

The ripping and rolling “Under The Scalpel Blade” has a hypnotic charm to it that will keep you listening even when you realise this is fairly stripped-back by the band’s usual standards. “In God We Trust” harkens back to the band’s Heartwork days without sounding like the band are merely trying to photocopy and reproduce former glories, as they manage to produce a track that is as must-hear. “Flesh Ripping Sonic Torment Limited” (I want this released as a single so I can hear a radio DJ say that on air) takes the crown as the band’s longest track to date and manages to find that balance of being long without feeling overly long (take note Dream Theater), both having heavy lurching sections while also having punching speedy passages that make the song one hell of a leviathan. It is surprising how ageless Jeff Walker sounds here; given how much vocalists can drop off over the years, Walker remains remarkably solid, as if the years passed him by with no lasting effect.

The album also maintains a high level of consistency, with picking a favourite being a hard task and an ultimately a pointless endeavour as you enjoy them all equally and have little reason to dislike any of them. The album is pretty much made for listening to in full, and any feelings of fatigue from repeated listens are blown away by the album feeling refreshed when put on shuffle.

The one element missing from Torn Arteries is that underlying feeling of danger you get when putting a Carcass record on, that quality that what you’re listening to is taboo and would have anybody else unnerved by what you’re listening to. Perhaps it’s the overly smooth production that removes the abrasive tone, but making a Carcass album very easy to listen to is both a help and a hindrance to the experience.

Easily an album of the year contender and perhaps one of the best examples of a band having a solid discography throughout their whole career, Carcass manage to exceed already high expectations on Torn Arteries and luckily you get to benefit from this as the listener.

Written on 21.09.2021 by
omne metallum
Just because I don't care doesn't mean I'm not listening.
More reviews by omne metallum ››