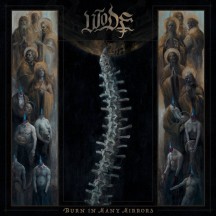 
As much of a fiend as I am for the abstract and the unorthodox strands of metal, I too can appreciate the younger bands that choose to go for a more retro, old school sound. But a retro sound infused with more contemporary techniques? Oh, my sweet Lord Azathoth, that's what I like to hear.

Wode are a UK four piece, and while perhaps a younger band in the grand scheme (formed in 2010), they already have two full lengths under their belt, so they aren't entirely new to the game. Burn In Many Mirrors, their third, blurs the line between black and thrash metal at a level I can't remember having enjoyed so much in quite a long while. There's a lot going on here in the way of possible influences, much of it from 80s extreme metal: bits of Hellhammer, Bathory, even perhaps some Hell Awaits-era Slayer. Many of the melodies also have an air of classic metal a la Iron Maiden or Helloween, not too surprising given at least two Wode members also play in a speed metal band. Yet Wode never veer too far into outright aping the styles of any of these artists, and the ways in which they combine these scattered retro influences seem entirely their own.

Songwriting-wise, Wode have an excellent way of making their riffs carry a driving gravity and momentum, and also of making their music get progressively more intense. Each track on Burn In Many Mirrors builds to a very clear and determined climax over its run, and Wode do very little in the way of meandering. Take ''Vanish Beneath'' for example: it starts with that thin guitar line atop those pulsing drums that give off an almost war march - type vibe, goes from there into that banging, midtempo riffage for the track's middle, and eventually ups the tempo for that explosive, mosh - inducing finish.

Thankfully, this isn't all there is to Wode's formula either. If it was, Burn In Many Mirrors would be enjoyable enough in its own right, but Wode have an additional layer of atmospheric subtlety they're exploring with this release as well. Some tracks display it more so than others, and there's definitely room for the band expanding it further down the line, but in general the moments where it comes out, normally in more melodic guitar lines or some sort of background electronic effect, go a long way toward helping the music vault to the next level. ''Fire In The Hills'' (personal favorite) likely displays this the strongest, with its swirly introduction and excellent harmonized vocal chorus that honestly doesn't sound too far gone from something Enslaved might come up with.

Burn In Many Mirrors hits the nail pretty squarely on the head with regard to what I really look for out of younger black metal bands: the ability to combine the grit, energy, and meanness of the Old School with the atmosphere and emotional nuances of the New School. Wode remind me a bit of the likes of Furia and Wayfarer in this respect, and while I wouldn't yet say they're quite of either band's caliber, they certainly have the capacity to get there in time. An all around well written, engaging, and just overall fun listen, I do indeed see Burn In Many Mirrors coming in on a good number of Year's End lists.

Play it loud and please, if you're going to be burning mirrors while you do, keep a damn fire extinguisher handy.

Written on 27.09.2021 by
Apothecary
Comforting the disturbed and disturbing the comfortable since 2013.
More reviews by Apothecary ››