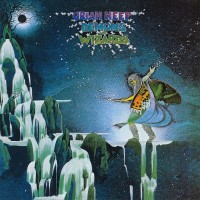 
Uriah Heep had released several albums by the time Demons And Wizards was released, including the critically acclaimed Look At Yourself, which was released the previous year, and is also one of my all-time favourite albums. However, it was this fourth release, Demons And Wizards, that really established the band Uriah Heep as a household name in British hard rock history.

At the very beginning of the early 70's, hard rock was really starting to take its shape, especially in the UK, with legendary rock acts contributing to the scene such as Black Sabbath, Led Zeppelin, and Deep Purple. Uriah Heep were another band that emerged through the hard rock scene during this time, and although they were lesser known than the big three I mentioned, they were still just as important, and shouldn't get overlooked.

This album saw the introduction of bass player Gary Thain, who brought a fresh new approach with his melodic bass lines, and a new drummer in Lee Kerslake. Thain and Kerslake together formed the new rhythm section that became part of the classic Uriah Heep line-up.

Demons And Wizards is most notably famous for containing the two singles "Easy Livin", and "The Wizard", "Easy Livin" being a very upbeat and catchy single, and possibly the most well known single by Uriah Heep. Although I thoroughly enjoyed the song, I did find it to be one of the weakest songs on the album, giving me the same feeling I had about the hit song "Paranoid" by Black Sabbath. "The Wizard", on the other hand, is a much slower paced single, and is a beautifully written semi-acoustic ballad; both of these singles showed a great diversity in the songwriting skills.

Other highlights are the songs "Rainbow Demon", which is my personal favourite song on the album, "Circle Of Hands", which is another excellent ballad-style track with a strong keyboard performance from Ken Hensley, particularly with the use of the organ at the intro, and "Traveler In Time", one of the heavier and catchier songs on the album, with a memorable riff. I also cannot go without mentioning the brilliant album closer, which is a combination of two songs, starting with the soft ballad "Paradise" that then merges into the lively upbeat "The Spell"; this is where you can clearly hear the progressive influences in their style. I found "All My Life" and "Poet's Justice" slightly weaker songs, but that certainly does not mean they are skippable by any means; they are still good quality songs.

Demons And Wizards is a great classic album that should certainly not be ignored if you have a taste for classic hard rock, or are a fan of early progressive rock.