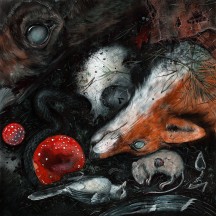 
How often do you really get your socks blown off by a Russian one-man band?

Rye, or under its original name Рожь, is a one-man band from the Karelian Republic in the Russian Federation, the project of one Vladimir Frith, who seems to have had some other projects from as far back as 2010. Usually I don't give much attention to unsigned one-man bands, especially if the person behind it doesn't already have some sort of reputation. A lot of these come and go, and sometimes they stay and release subpar albums just about yearly. But this is Rye's debut full length, it has a fantastic cover art, and it seems to have picked up some steam on some other websites. So I gave it a go. Oh boy!

So the first thing that stoke me was how great the production quality was. Generally you'd expect an amateur job from an unsigned one-man band, but I have heard far far worse from pros, so hearing this make this much of an impact just by how great it sounds, that immediately put a grin on my face. And then Вечное (Russian for "Eternal") was a funeral doom record. Glacial pace, massive riffs, growls so low that they drag on the dirt. But then it returned to the atmospheres from the beginning, an ambiance that feels trapped between ominous folk, sentimental post-rock, and dreamlike ambient. And then the riffs went into a frenzy and it was black metal, mostly of the atmospheric kind, with a lot of post-rock sensibilities to turn it almost metalgaze-y. It's quite a lot from a relatively short album.

Вечное follows the four-track formula that feels pretty natural at this point. I don't think there was any intent of mirroring the cycle of the seasons as much as an emotional journey. Each of those sits between six and eleven minutes in runtime, to a grand total of barely under forty minutes, so it's fair to say that this is long-winded, but doesn't overstay its welcome. In fact, it's an album that flows very naturally and feels like it rewards the full listen. All of the transitions from post to doom to black metal to completely non-metal never feel forced, and each of them only further increases the immense depth, emotional and artistic, that Вечное has.

With such a sparse discography in the last decade, I can't say that I'm really afraid of Rye turning into a band that churns material faster than I can keep the pace, but if they're at least half as good as Вечное, I am willing to come along for the ride.

Written on 28.09.2021 by
RaduP
Doesn't matter that much to me if you agree with me, as long as you checked the album out.
More reviews by RaduP ››