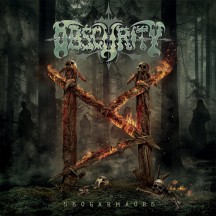 Skogarmaors is one of those very solid albums that doesn’t really do anything special. And while it is rather traditional in terms of sound, Skogarmaors does feel very refined. Production-wise, this album sounds very polished. There’s a good balance between the instruments, and the vocals are blended in flawlessly as well. So all in all there’s not a lot more to say about the production. Very nice stuff.

Onto the performances then, and those are really good as well. The guitarists offer some nice melodies throughout the records, the drums offer the necessary energy and do (just like the bass) bolster the overall sound. Add on top of that the aggressiveness of the vocals and you have that edge you’d want from a death metal album.

"Death metal?", I hear you say. Isn’t this a (pagan) folk metal/viking black metal album? Yes and no... Those elements are sprinkled throughout the record, but all in all I did feel like this one felt a lot like a straightforward death metal record. I do wish that the other influences would be more pronounced, especially the folk elements. More of them (and in a more prominent role) could have given this album a bit more personality and variety. The flow of Skogarmaors is good, but there isn’t a lot of ebb in it. What do I mean by that? This record does manage to keep the energy up throughout the whole ride. However, it feels like a ride on cruise control, keeping up the same speed without anything eventful happening. That’s both a positive and a negative in my book. Its strength is that it does make sure that you are still paying some attention to it at all times; on the other hand, it feels like the songs form one big haze. They start blending (a bit too much) into each other.

You know, this is the kind of record that works extremely well as background music. I’m not saying that to be dismissive in any way; it gets you in a zone. A zone that’s perfectly enjoyable without any standout moments. It does what it needs to do and that’s mostly it. Don’t expect something surprising or something that sounds fresh. To conclude, Skogarmaors is a solid effort that most death metal fans will like (at least to some extent). That’s mostly due to its not-so-daring approach though. For the traditionalists, this is definitely a worthy listen. For those who are looking for a bit more (and special), I feel like you can safely skip this one. To summarise this whole review with just one word: solid.