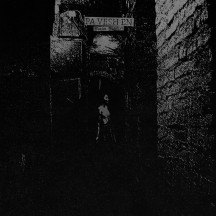 
If you find yourself haunted by psychotic howling, dense bass noise and creepy melodies veiled behind a wall of deafening crash percussion, consider picking another dark, smoggy street to walk down before you’re pulled into an alley, never to return. Actually, chances are you’re just listening to Maniac Manifest, and all is well.

Pa Vesh En is a one-man “raw black metal” band from Belarus, and this album is his third full-length album, released on Iron Bonehead Records like the rest of his discography. “Raw” is a common descriptor in these styles of music, but I was not aware “raw black metal” being a proper style of black metal (sub-subgenre to metal?). I’m not entirely sure what constitutes “raw” music, if there even is any sort of consensus on this (what’s the opposite, “cooked” black metal?). If “raw” simply refers to an in-your-face, lo-fi production, then Maniac Manifest seems to fit neatly into the “raw black metal” category, with a disclaimer. If “raw” also implies an unsophisticated, straightforward approach to songwriting, Maniac Manifest is rather rare than raw (this is a compliment), with another disclaimer.

A disclaimer: the production is indeed lo-fi; the middle registers are mostly absent, the lower registers an infernal racket of gain, distortion, toms, and kicks, and the higher registers mask the entire mix with the screeches, crashes, and clangs of tinnitus-inducing cymbal work. So, that would be “raw”, I take it. However, Pa Vesh En’s intimidatingly ferocious drumming, deranged prey-meets-serial-killer shrieking and bawling, and buzzing, serrating tremolo guitars do not drown in this aural maelstrom, as I first feared. Instead, they are anchored by an omnipresent, always perfectly audible bass guitar that led me through twists and turns down ever foggier alleyways. The middle register also sometimes reveals the smattering of a snare drum in furious bursts that really adds to the album's vibe of violent madness. Raw, yet cooked to perfection (or just beaten into submission).

Another disclaimer: the songwriting is unsophisticated, but far from straightforward. Quite the opposite, actually, it is rather something like unsophisticatedly not-straightforward. The songs on Maniac Manifest are easily recognisable thanks to a great amount of variation, and the dynamics throughout the album are stellar, thanks to a masterfully arranged track list. The opening intro track sets the stage for a blast fest to come, but as I am running from the screams of “Homicidal Sacrifice”, Pa Vesh En ambushes me with a DSBM number. Carried by a repeating, high-pitched synth motif, the song beckons me towards a rusty door, blood-splattered with the words “Chamber Of The Rotten Flesh”. As I enter, all hell breaks loose; snares and cymbals stab my ears like glass shards, to a degree that would have made Euronymous, uh, if not deader, then at least still very dead. Then I start headbanging like crazy, as a thrash riff breaks through the extreme noise and Maniac Manifest offers a couple of minutes of good, clean fun.

As I’m dragged through twists and turns down yet foggier alleyways, some twists start to feel like déjà vu, and some turns turn out to be dead ends: “In The Woods Of Hanged Men” is carried by a beautiful lead melody as tormented souls wail above barely discernible rhythm guitars as the percussion alternates between blast beats and mid-paced passages until the song collapses. It collapses into a grating cacophony that slowly, too slowly, settles into a bass-driven hook taking the song to its finish, or rather false finish, as it unnecessarily erupts again for a while longer. The next track features a horror film style synth string rhythm popping up now and then, which makes “Conquerentes De Iniqua Nece Confessionem” (Complaints About A Wrongful Murder Confession) properly danceable (!!!) at times. However, it generally lacks focused songwriting, sounding more like a mash-up of all that I’ve been hearing before I entered this courtroom. Hence, “unsophisticatedly not-straightforward” songwriting.

Twists like déjà vu, and turns like dead ends, but mostly very enthralling music, so far. How fortunate, then, that Pa Vesh En saves his best murder party tricks for last. In fact, Maniac Manifest is the opposite of front-loaded. My favourite tortures are all on the album’s latter half. In the backrooms, so to speak. “Spellbound By The Witchmoon” is a rocking, melodic, fun second-wave black metal song that is topped off by a surprisingly triumphant, beautiful, and perfectly timed melody soaring above a shredding guitar that ends the song mid-solo. It is, quite simply, one of the best black metal pieces of the year, perhaps even one of the best I’ve ever heard. “The Black Coffin” sets a dense mood with noisy drones, and “Sister Of Sin” seems to stop just short of evolving into something truly grand.

With a little more focus, and some more editing, I would have had a hard time finding faults here; Pa Vesh En is liable to release something truly excellent soon enough, so I will keep my eyes peeled (had my eyelids not already been peeled off) on this Belarusian maker of soundtracks to getting serial killed. Now, go get murdered, because Maniac Manifest is, for all its twists and turns, some of the best black metal of the year.